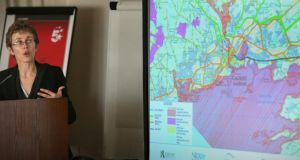 A €500 million bypass option to relieve traffic congestion in Galway involves a new bridge and viaduct over the river Corrib and two short tunnels on the city’s east side.

Some 41 houses could be demolished, if the final preferred route presented to city and county councillors on Thursday is approved.

The “emerging preferred route corridor” will affect houses right along the route from Briarhilll on the east to Barna on the west.

Stables at Ballybrit racecourse face demolition, with a cut and cover tunnel at the top of the racecourse to minimise disruption, according to project engineer Eileen McCarthy of Arup.

A second tunnel is earmarked for Coolagh close to Lackagh quarries off the N84.

Land at NUI Galway will also be affected, as the bridge and viaduct crosses just south of Menlo castle. 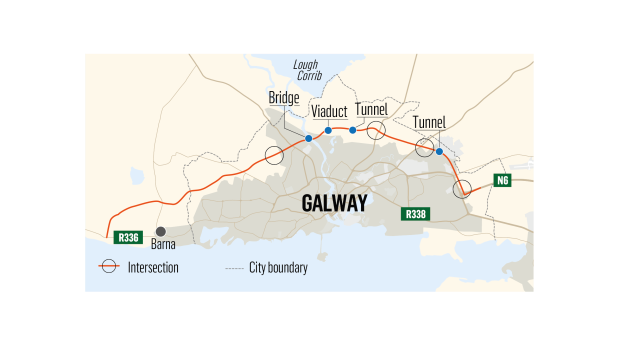 The proposed route connects to the large suburb of Knocknacarra at Ballymoneen road, and continues to Barna, bypassing Barna village.

An “all-grade” roundabout is proposed at Furrymelia in Barna to minimise impact to homes here. It ties in to the R336 road to Connemara some 2km west of Barna village.

The project aims to work with landowners, with some 400 notified, and submit a planning application to An Bord Pleanála next year.

The N6 Action Group involving residents in a number of areas including Dangan said its initial reaction was one of “devastation”.

It said alternative transport options should have been considered before the route was “imposed”.

Six routes had originally been proposed by the N6 Galway City Transport Project, attracting some 992 unique submissions. Some 300 meetings were hosted as part of consultation, Ms McCarthy said.

NUI Galway and Ballybrit race course and a number of residents groups had expressed opposition to the various routes, all of which lie south of an original bypass design ruled out on environmental grounds

The Department of Transport allocated €2 million last year to “reboot” the bypass project, after €14 million was spent on the previous, abandoned, scheme.

Galway City Council director of services Joe O’Neill said that public transport was also part of the plan, and bus use was on the increase, following construction of bus corridors.