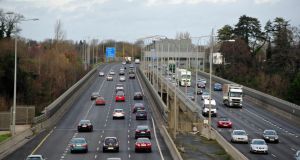 National Toll Roads (NTR) has received a multi-million euro refund from the taxpayer after successfully appealing a 2005 valuation of its M50 West-Link bridge on which it had paid commercial rates for five years.

It is also understood that having recently received a cheque for €7.05 million from Fingal County Council following the successful Supreme Court ruling last October, the company is now seeking a further €3 million in interest.

The company operated the bridge over the Liffey on Dublin’s main traffic artery before it was bought out by the State.

When the M50 was expanded to three lanes its rateable value was adjusted by the commissioner of valuation, increasing the applicable commercial rates to a level ultimately disputed by the company.

Following an eight-year legal battle involving three separate appeals, the company’s ’s view that it had been overcharged on its rates was vindicated.

Mayor of Fingal Kieran Dennison has said that while it was a considerable amount of money, the local authority had no choice but to refund the rates.

Fingal County Council was listed as a notice party to the appeals process.

“To some extent it’s nobody’s fault. It’s a judgment call as to the evaluation of this bridge; even in the Supreme Court one judge took a different view to the other two,” said Mr Dennison.

“You could argue that this is money that we shouldn’t have had in the first place, and that is obviously what the judgment is.”

Debt provision
He said with a debt provision or contingency fund of more than €20 million, the council was well placed to pay the bill and it would have no impact on commercial rate payers.

However, he described the €3 million sought in interest as an “extortionate” demand that would be contested.

“We feel NTR have done quite well out of this.”

The company declined to comment but pointed to recently published financial statements that said: “Post period end, the group was successful in its appeal to the Irish Supreme Court in relation to historical overpayment of rates amounting to €8.6 million arising from the West-Link toll concession.”

The reason for the disparity in figures is unclear.

The 2005 “rateable valuation” on the infrastructure arrived at by the commissioner of valuation was appealed to the independent Valuation Tribunal by NTR through its company West-Link Toll Bridge Ltd and it was reduced.

However, that decision in turn was appealed successfully to the High Court, with the original valuation reinstated.

Another appeal from WestLink Toll Bridge Ltd was lodged with the Supreme Court, which last October decided to reduce the scale.