Contamination of green bins ‘gone mad’ in past five years, with nearly a third of material in bins unsuitable 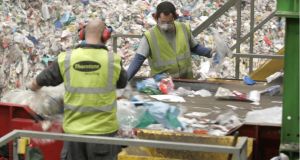 What is acceptable to put in a household green bin varies almost as much as where the waste eventually ends up.

All waste providers allow paper and cardboard. Most allow aluminium and tin cans and plastic packaging, but others are prescriptive on the types of plastic they will allow. One or two allow glass.

None allow used cooking oil, nappies or dead dogs, yet these things do end up in the dry mixed recyclables bin.

“You do find horrendous stuff in the green bin,” said John Dunne, manager of Panda Waste. “Nappies are actually the worst overall. If a nappy gets through and gets bailed and gets to the Far East, it may have to come back after going halfway round the world.”

The Environmental Protection Agency, in its recently published 2011 National Waste Report , puts the level of contaminants of the green bin at under 10 per cent. This, Mr Dunne says, is wide of the mark, in Dublin at least.

“The contamination rates have absolutely gone mad over the last five years: 32 per cent of the Dublin green bin is made up of stuff that’s not meant to be there – clothes, nappies, food, garden waste, glass.”

Huge cost
Contamination is a huge cost to the industry, not just in employing people to remove these items, but because containers will be sent back from as far away as China if the bales of material are found to be unclean.

The fact that the green bin is always cheaper and sometimes free encourages contamination. Niall Killilea of City Bin, says their contamination levels are low in Dublin because in addition to not charging for the green bin, they have no charge for the brown bin, thus preventing food and garden waste being diverted into the green bin.

In order to “encourage” householders not to contaminate their recycling, Panda has developed a camera system within bin lorries which takes pictures of the customer’s bin as it is emptied into the back of the lorry.

“In the trials we’ve done with the cameras we wrote a letter to customers who had put out a contaminated bin and the results were immediate. After two weeks contamination levels had dropped to 22 per cent; two weeks later they were in single figures.”

The system is being trialled on 10 routes in Dublin, and will be on all of Panda’s Dublin lorries by January.