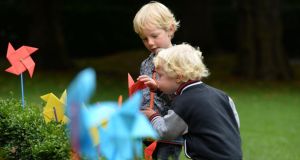 Oscar and Arthur Kenevey, of Clarehall, Dublin, at the bandstand in St Stephens Green, Dublin for the People’s Climate Picnic today as world leaders including Taoiseach Enda Kenny prepare to meet in New York next week for a UN crisis summit on climate change. Photograph: Dara Mac Dónaill/The Irish Times

It was the main event held in Ireland to mark a global protest over climate change and was organised by Stop Climate Change, the Climate Gathering and People’s Climate Ireland.

Ciara Kirrane, co-ordinator of Stop Climate Chaos, said the event was held to send a message to Taoiseach Enda Kenny that people in Ireland cared about climate change. “This level of prioritisation of climate change, both at home and internationally, is long overdue,” she said.

“By placing the Climate Bill on the “A” list the government is signalling its intention to enact climate legislation before the end of 2014. The Taoiseach is on the record as saying this is his hope, and we are calling on him to commit to that deadline at the Climate Summit on Tuesday.”

This evening, Happenings, the pop-up cultural events organiser, was screening the documentary Samsara in Dublin’s Merrion Square as part of the global day of climate action. Gates were due to open at 6.30pm and the film to begin at 8pm.

Meanwhile, world leaders including UN secretary-general Ban Ki-moon were to join farmers, fishermen, children and others in a massive demonstration in New York today to demand action on climate change.

Organisers were expecting 100,000 to join the People’s Climate March in midtown Manhattan ahead of this week’s UN General Assembly, which brings together 120 world leaders to discuss reducing carbon emissions that threaten the environment.

The New York rally was expected to be the largest on a day of events in 161 countries including Ireland, the UK, France Afghanistan and Bulgaria.

The gathering was to include celebrities such as musician Sting, scientists, labour groups, 20 marching bands and floats powered by biodiesel vehicles or pulled by hand, said Jamie Henn, spokesman for 350.org, which organised the event with more than a dozen other environmental, labour and social justice groups.

“You can’t fight climate change sitting on your couch and holding your breath,” Henn said.

Organisers said the massive mobilisation is aimed at transforming climate change “from an environmental concern to an ‘everybody issue’ ”.

The UN on Tuesday is set to host a climate summit where world leaders will continue talks toward a pact 200 nations are working on that would rein in rising greenhouse gas emissions. Negotiators aim to complete that deal in late 2015.

In London, actress Emma Thompson and fashion designer Vivienne Westwood were among celebrities who took part in a march of thousands of people who processed through central London towards a rally by parliament.

“Politicians are not showing the will. There is not a problem with the science, there is a problem with the political will,” said Ben Phillips, campaigns director for Oxfam. “That is why it is so important that people are marching here today.”

New York City Mayor Bill de Blasio, who is expected to join the New York marchers, today unveiled a new plan for the city to reduce its greenhouse gas emissions by 80 per cent from 2005 levels by 2050.

All 3,000 city-owned buildings that use significant amounts of energy would be retrofitted with energy saving heating, cooling and light systems by then, he said, though meeting the commitment will also require significant investments by private landlords.

“Climate change is an existential threat to New Yorkers and our planet. Acting now is nothing short of a moral imperative,” Mr de Blasio said.

The 2-mile (3.2km) route sanctioned by the New York Police Department winds past Times Square, where dozens of giant billboards flash even at midday and attempts at eco-friendly signs - lit by wind power - have been spotty.

Organisers bill the event as the largest gathering focused on climate change since 2009, when tens of thousands of people gathered in Copenhagen in a sometime raucous demonstration that resulted in the detention of 2,000 protesters.