More sunshine for Ireland as storms hit parts of Europe

Dublin office workers stopped to watch teenagers jump into the river Liffey on their lunch hour, as they jumped from quayside buildings cooling off on one of the hottest days of the year. Temperatures are expected to soar to 23 degrees this week. Video: Bryan O'Brien 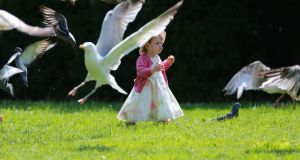 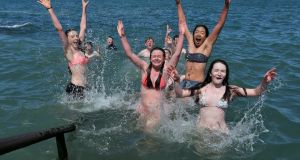 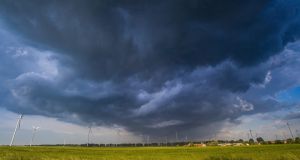 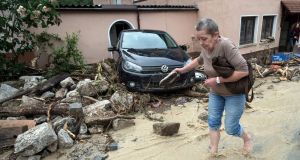 A woman walks through muddy water in a residential area in Braunsbach, Germany after heavy storms and severe weather. Photograph: Marijan Murat/EPA 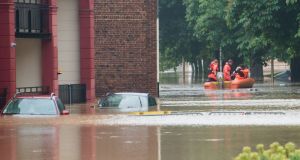 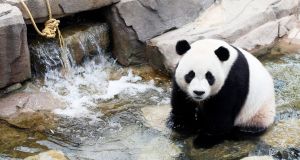 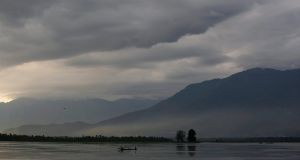 Storms are wreaking havoc across parts of Europe as Ireland’s calm and sunny weather is set to continue into next week.

Sunglasses, sunscreen and a hat will be every Irish person’s best friend on Tuesday with temperatures reaching 23 degrees.

Fog cleared during the morning for a dry and sunny day across the country, although it will be cooler along the north and northwest coast due to northerly winds.

Met Éireann forecasters predict the sunny and dry weather will continue through to the bank holiday weekend with temperatures rising to 25 degrees. It is set to get even warmer next week.

While Ireland is basking in the sun, parts of Europe are experiencing rain, hail and storms.

Rain wiped out day nine of the French Open, the first time in 16 years that a day’s play at Roland Garros was called off due to downpours.

Southwestern Germany is coping with floods and mudslides after torrential rains in recent days.

Across the water, the UK Met Office has issued weather warnings as London is set to be hit with thunder storms, heavy winds and rain this week.

In Ireland, the rest of the week and weekend is set to be sunny and dry with light breezes.

Tuesday night will have some mist or shallow fog patches with lowest temperatures between 6 to 10 degrees.

Hotter weather is expected on Wednesday with the mercury rising to 24 degrees.

Thursday looks likely to be cloudier and cooler with some light showers and temperatures between 14 to 22 degrees.

However, the bank holiday weekend will be warmer and generally dry across the country.

The Irish Coast Guard, the RNLI and Irish Water Safety are warning people to be careful in or near water.

The organisations said there had been a “significant rise” in maritime recreational incidents over the weekend due to the good weather.

Eugene Clonan, Coast Guard chief of operations , said there had been a noticeable increase in the number of calls over the weekend,

“Sunday was particularly busy with 23 calls in response to maritime recreational incidents,” he said.

Gareth Morrison, RNLI lifesaving delivery manager, said there had also been an increase of callouts for lifeboats.

“Many of these incidents relate to leisure activities where a nice day out has unfortunately ended in a call for help,” he said.

“ Seeking some simple advice before you take to the water or coastline could make all the difference.”