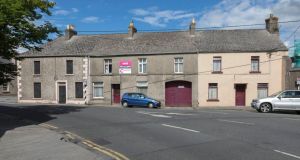 The three houses on Vicar Street, Kilkenny, due to be demolished as part of a road scheme. An Taisce says one of the houses has a late medieval gable. Photograph: Dylan Vaughan

Minister for Arts and Heritage Jimmy Deenihan is being urged by An Taisce to spare a the remnants of late medieval manse house opposite St Canice’s Cathedral in Kilkenny that stand in the way of a controversial road scheme.

This follows the discovery that one of the three 19th century houses due to be demolished to facilitate the central access scheme contains a late-medieval gable and a shouldered chimney “identical to that of Rothe House”, one of Kilkenny’s tourist attractions.

“This medieval manse house is clearly an integral part of the St Canice’s Cathedral complex. It ticks all of the legal boxes to qualify as a national monument due to its historical, archaeological, architectural and cultural nature,” An Taisce said.

“There is now a very reasonable expectation that substantial remains of the lower elements of the entire building will be uncovered. Thus, a fine new tourist attraction would be created along Kilkenny’s ‘Medieval Mile’.”

An Taisce said the gable and chimney, standing at 5m, had been identified as being parts of a manse house used by canons of the cathedral in the 16th and 17th centuries, and it called on Mr Deenihan to declare it a national monument “without delay”.

Dr Mark Clinton, chairman of the trust’s monuments and antiquities committee, said it was “perverse that in order to introduce more cars and tourists into medieval Kilkenny the council are planning to demolish part of the very fabric of the medieval city”. He noted that 1,000 people had marched through Kilkenny last Saturday week in protest at the road scheme. The demonstration was organised by the Campaign to Complete Kilkenny Ring Road, which wants the ring road prioritised over the €10.7 million central access route.

Plans on hold
Plans to demolish the three Victorian houses on Vicar Street last July were put on hold after a solicitor’s letter on behalf of An Taisce noted that they were part of the medieval complex of St Canice’s Cathedral and thus likely to contain earlier remains.

The council said the central access scheme had been approved by An Bord Pleanála and archaeological investigations “are continuing in accordance with best practice and under direction and supervision of the Department of Arts, Heritage and the Gaeltacht”.

Boy (15) stabbed during row between gangs of youths in Dublin 11:38
Election 2020 outtakes: Campaigner for Timmy Dooley has car stolen 11:26
Sable kept as pet in Co Cork found to have rabies-like virus 10:45
Bodies of three young children found in house in Dublin 12:19
Boy (17) dies and three others injured in Dublin car crash 09:42