€300m project will have transformative effect on North, say Ministers 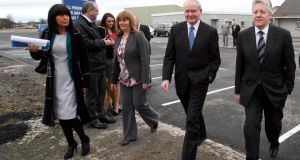 Peter Robinson and Martin McGuinness have jointly and emphatically praised plans for the £300 million redevelopment of the 347-acre Maze-Long Kesh site which they say will have a transformative effect on Northern Ireland.

The Stormont First Minister and Deputy First Minister stood on the site near Lisburn, Co Antrim, which once held the H Blocks of the former prison, which closed in 2000 in the wake of the Belfast Agreement and the release of former paramilitary prisoners.

Together they gave their seal of approval to the plans drawn up over the past seven months by the Maze-Long Kesh Development Corporation. These envisage a £100 million investment before 2016, which will see the construction of a £25 million Peace Building and Conflict Transformation Centre. This will be designed by Belfast firm McAdam Design alongside internationally renowned architect Daniel Libeskind, who has drawn plans for the World Trade Center site in New York and the Jewish Museum in Berlin. The first sod will be turned in autumn, with completion in late 2015.


Global significance
Terence Brannigan, chair of the Maze-Long Kesh Development Corporation, said the development was of international significance because of its history and its scale.

The site is twice the size of Belfast’s Titanic Quarter 10 miles away, and four times the size of the Canary Wharf in London’s financial district, he said.

“The peace-building centre and the other retained buildings show the movement from conflict to peace. The rest of this site shows that you can not only move into peace, you can also move into prosperity from that conflict. Hopefully we can demonstrate to others who are going through that pain that it is possible not just to emerge from it but to create something better.”

Maze-Long Kesh is located within 90 minutes of four million people in Ireland north and south, close to two airports, the Belfast-Dublin motorway and a main route from east to west.

The plans include a business campus for enterprises from agrifood, to life sciences and renewable technologies, and research and development facilities linked to the universities.

The Royal Ulster Agricultural Society is investing heavily and will host its annual show there next month.

The site, originally an air base, will feature restored second World War hangars and house the 21-aircraft collection of the Ulster Aviation Society. Maze-Long Kesh was a US Air Force base during the war.

About 200 residential units, both private and social, are planned, along with sports and leisure facilities.

Peter Robinson strongly criticised unionist opponents of the peace-building centre who fear a “shrine to terrorism”: “I rather suspect the people who are making the noise today will be very silent when they see the fantastic outcome that we will have in a few years’ time.”


Sensitivities to past
Martin McGuinness said he had no interest in any shrine to conflict: “This building will only be a shrine to peace . . . People will be proud of the way in which we, in a very sensitive fashion, recognise that we have to do this in a way that respects everybody.”