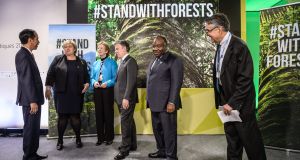 Ms Robinson, former president of Ireland, said on Monday she was very struck at the marked focus on the impact of climate change on people and vulnerable societies in addresses delivered on the opening day of COP21.

Speaking to The Irish Times, she said she hoped such a people-centred focus would carry through to the negotiations.

“The problem is that unless those heads of state say it expressly to the delegations [from their countries], it may not carry down.

“We may be back to the same not so people-centred approach of the past.”

A lot of preparation

Ms Robinson said her optimism was founded on a lot of preparation being done before this summit.

She pointed to 180 countries having made commitments in addition to additional commitments to climate finance.

She backed participation in the event of businesses, cities, civil society and faith-based groups.

“This is creating momentum that is pushing the process,” she said.

Asked about Ireland, she said she did not like to talk specifically on a political matter. “I always want every country including Ireland to be more ambitious.

“There is room for improvement and I do hope this conference will help,” she added.

On the wider commitment by the EU to deliver a 40 per cent reduction in greenhouse emissions by 2030, she said it showed leadership but said the EU still had to think about doing more.

“That is extremely important. We have damaged the Earth and made it more difficult for developing countries.

“Some of the children are more aware than their parents, and so they should be because it is their future. Every child born today will live through the best and worst of the future that we leave them.

“Every child, because they will live to 90 or 100 years, then we will know if we have got to the stage of coping well with the situation,” she said.

Ms Robinson was speaking after an event at which major world leaders endorsed forests as a key climate solution.

The initiative supports rural economic development which does not lead to deforestation and massively increases forest restoration.