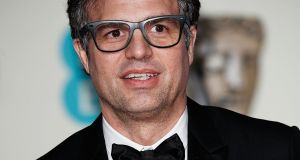 The Stop the Drill campaign has drawn support from a variety of people, including Hulk and Avengers actor Mark Ruffalo. File photograph: John Phillips/Getty Images

Environmental campaigners in the North have vowed to block any attempts by an oil consortium to carry out exploratory drilling close to a drinking water supply in Co Antrim.

At a Stop the Drill public meeting in Carrickfergus on Thursday, activists said oil and toxic chemicals used during Infrastrata’s processes will “undoubtedly end up in our water supply” and contaminate it.

The oil and gas firm rejects this suggestion.

Protests are ongoing at Woodburn Forest in Carrickfergus against Infrastrata’s work, less than 400 metres from Woodburn Reservoir, which supplies water to the town and to Larne, Newtownabbey and a range of areas in Belfast.

Infrastrata was granted a licence to drill an exploratory borehole for oil and gas under permitted development rights after Stormont’s Department of the Environment said it did not require planning permission.

A crowdfunding website has been set up by concerned citizens with an aim of raising £4,000 (€5,060) “to protect the Woodburn Forest and Reservoirs” and pay for expert consultants and legal support as the campaign progresses.

They feel the drilling will destroy the forest, and that homes in the area will lose value, so a range of solicitors’ letters have been sent including to Mid and East Antrim Council, which now has planning powers, to ask it to “review the lawfulness of granting permitted development to the contentious project”.

James Orr of Friends of the Earth said: “There is a stand-off between protestors and the police at the site.

“Nearly three acres of trees have been felled without consent, without planning permission, no tree-felling licence, no lawful authority to be at the site - and not only that, it’s a public forest.”

Mr Orr said Infrastrata had to clear the trees before the start of the bird breeding season on March 1st, but wrens, blue tits, robins, and ground nesters will possibly be on the site and the habitat needs to be protected.

The Stop the Drill campaign has drawn support from a variety of people, including Hulk and Avengers actor Mark Ruffalo.

The US star and founder of clean water advocacy group Water Defense wrote to the North’s Minister for the Environment, Mark H Durkan, advising the group would be sending water testing kits to residents.

“We implore you to protect your citizens by protecting their water,” Mr Ruffalo wrote.

“The small amount of oil and gas that can be extracted from that site pales in comparison to the nightmare that contaminating the water supply for over 131,000 residents in your community would cause.”

Northern Ireland Water has said it was satisfied Infrastrata’s work would not have a negative impact on the public water supply.

“The well site has been designed to ensure that all potential discharges from the site are contained and no discharges, either controlled or uncontrolled, will occur from the site into the catchment.

“The site has been designed as ‘zero discharge’ which means there will be no discharge from the site to local watercourses and therefore no adverse impact on the catchment,” the utility said.

“Water quality testing is undertaken by NI Water to ensure that monitoring is carried out according to risk assessment as required by the drinking water regulations.”

Infrastrata rejected suggestions its practices were unsafe and insisted the borehole would be lined with multiple layers of steel casing and cement to protect the surrounding environment.