Marches aim to pressure Government ahead of climate summit

Thousands expected in Dublin, Cork, Galway and Belfast to urge action before COP21 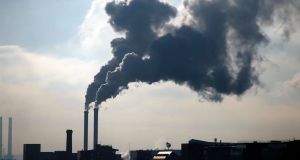 People’s Climate and NGOs are calling on the Government to commit to producing a climate action plan next year, to pledge “adequate finance” to the Green Climate Fund, to ban fracking and to commit to reducing pollution from all sectors. File photograph: Charles Platiau

Thousands of people in Cork, Dublin, Galway and Belfast will take to the streets on Sunday to put pressure on the Government and world leaders ahead of the COP21 climate change summit in Paris.

The marches, coinciding with similar events all over the world, are organised by Stop Climate Chaos – a coalition of 28 NGOs and other groups including Friends of the Earth, Oxfam and Trócaire, and supported by Ictu.

One of the groups, People’s Climate, said the “horrific and tragic” events in Paris recently meant French civilians could not express their fundamental right to demonstrate, “which means we in the global movement and in Ireland must mobilise with even more determination than before”. Protests are banned under France’s state-of-emergency legislation.

The groups are calling on the Government to commit to producing a climate action plan next year, to pledge “adequate finance” to the Green Climate Fund, to ban fracking and to commit to reducing pollution from all sectors.

“This event is part of a Global Climate March. On November 30th, world leaders meet in Paris to start negotiating the next global climate deal,” People’s Climate said.

“That’s why, the day before, people around the world will take to the streets and push leaders at every level of government to commit to tackling climate change.”

In Dublin the march begins at Custom House Quay at 2pm and finishes on Molesworth Street opposite Leinster House, with speeches from climate action activists.

In Cork the event begins on Grand Parade at 2pm. Organisers there say they will be marching in the name of “climate justice, clean energy, sustainable cities, a fossil-fuel free future and green jobs”.

Community group Transition Galway is helping to organise the Galway Carnival for the Climate in the city on Sunday. It invites all those taking part to dress up to help add to the carnival atmosphere, and wants street performers, drummers, musicians and singers to take part.

The gathering starts in front of The Skeff at Eyre Square at 12.30pm, leaving at 1pm to go down Shop Street and Quay Street to the plaza in front of the Galway City Museum at the Spanish Arch.

The Belfast march starts at Donegall Street at 2pm, and participants will gather at Writer’s Square for what they plan to make the “largest-ever climate gathering” in the city.

Organisers want the Northern Ireland Assembly to introduce an “ambitious climate change Bill” and to reduce carbon emissions from all sectors. They are also calling for community ownership of renewable energy.