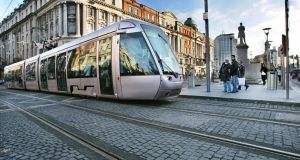 The construction of the new Luas Cross City line will begin at six sites from St Stephen’s Green to Parnell Street in the coming days. Photograph: Matt Kavanagh

The first major roadworks to facilitate the construction of the new Luas Cross City line will begin in Dublin city centre this week.

Traffic will be restricted, footpaths will be closed and taxi ranks will be moved to allow gas, electricity and water pipes to be taken out of the way of the tram route which will run from St Stephen’s Green to Cabra and connect the existing Red and Green lines.

Work will begin at six sites from St Stephen’s Green to Parnell Street in the coming days. At five of the worksites, St Stephen’s Green North, Grafton Street Lower, Westmoreland Street, Hawkins Street and Parnell Street, the number of traffic lanes will be reduced, but there will be no road closures. Where footpaths are closed, alternative pedestrian access will be provided. Access to businesses near the works will be maintained at all times.

Weekends
At the sixth site, around the Spire in O’Connell Street, the road will be closed during the work, but it will only take place at night over weekends to minimise disruption. The decision was taken because the large volumes of pedestrians moving between Henry Street and O’Connell Street would make it too difficult to progress work during the day.

At each site the work will involve digging up the roadway and removing any utility wiring and pipes and laying new services under the adjacent footpaths so that any future maintenance or repair works will not require the tram tracks to be lifted. The work is being done in sections of about 30 metres and is estimated to take 12 weeks per site. Once completed, the road and path will be reinstated and six more sites will be selected for the same process. The full utility diversion project is expected to take 18 to 21 months.

While bus routes will not be altered over the coming months, taxi ranks will be moved from this week on a phased basis as the work requires. The rank at St Stephen’s Green North near the Fusiliers Arch will move west along the street to in front of the former Anglo Irish Bank building. The ranks on Dawson Street will move to Molesworth Street. The spaces at the bottom of Grafton Street will be split between Nassau Street and Foster Place. On O’Connell Street the southbound rank will move to Marlborough Street.

Alternative ranks
Ranks will also be closed at Westmoreland Street, O’Connell Bridge and Marlborough Place but the locations of the alternative ranks have yet to be determined. A spokeswoman said the taxis would be “accommodated locally” when the work schedule required the ranks to be moved.

Once the utilities have been moved, work can begin on laying the tracks. This is due be completed by autumn 2016 after which overhead cables, signal controls and other electrical and mechanical systems will be put in place.