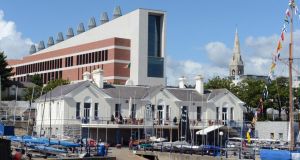 Dún Laoghaire-Rathdown county librarian Maireád Owens says she is filled with excitement and apprehension in the lead up to the opening of the €36.6 million controversial new seafront library and cultural centre.

The building became the most debated issue during the local elections when it was criticised as a “monstrosity”.

Dlr Lexicon is the official name for the Dun Laoghaire-Rathdown library and cultural centre, which is due to open in full in October and partly for the Mountain-to-Sea festival in September.

Owens said the name “Lexicon” was chosen as it stood for knowledge and words.

The centre will house about 80,000 items, including books, CDs and DVDs, for people to borrow. More than 50 mobile devices such as laptops, iPads, and Kindles will be available for people to use.

“I’m really excited at the centre. It’s a stunning public space and quite extraordinary. I also have a certain level of apprehension hoping the community will love it and realise it’s a building for them. The criticism has been hard.”

Owens said the interior was decorated in neutral tones of browns and blues, had large, open civic spaces at the park side of the building and small, snug rooms on the other side.

“To balance out the large busier areas there are cosy, intimate and quieter spots throughout.”

European oak was used for the shelves, stairs and furniture, and shades of blue for the carpet and sofas.

“This is to allow the colour to come from books,” she said.

There are two entrances. One is accessed by walking in from the harbour and up along the side of the building and through the café. The main entrance is on Haigh Terrace, off Georges Street, through a revolving glass door.

To the right of the stairs is an automatic book sorter which will be able to receive books 24 hours a day.

On the same level towards the seafront is a long art gallery with an audio-visual “mini-gallery” at the end of the room.

“There’s no art gallery in the county. We needed a dedicated gallery space,” she said.

Owens said there was a “Lexicon lab” with Apple Mac computers where young people and adults can make 3D graphic designs and a space for teenagers to use for different activities.

“We haven’t filled the building with fixed PCs as technology changes so rapidly and we want to keep up with it but it’s up to the community what they want and need. We’ll react to that.”

The floor above the main entrance is the main library with seating areas next to the floor-to-ceiling windows that look out on the sea.

“The height in the library is surprising and spectacular. The views are there for the public to enjoy.”

“For the first time even Dún Laoghaire will have a dedicated children’s library. The public can come in, sit down and enjoy the stunning views from the building.”

To the right of the stairs are study and quieter break-out rooms “to create balance” with the large open spaces.

Owens said a map of Dún Laoghaire is etched into the concrete in the far corner as an “understated and quirky” touch.

She said the top floor had a “softer feel” with navy blue carpet covering the main floor. This will house a local history room for special collections, study and reading rooms and the office for the writer in residence.

“The top floor is a celebration of local history and writers. We haven’t had a space in the county to do that before. It’s a public space.”

The bottom floor, called Moran Park level, has a café with long windows looking out on to the park, the auditorium with 120 retractable seats, offices for staff and storage for about 40,000 items for all the libraries in the county.

A bronze sculpture called Christ the King is back and has been placed on a raised platform in Moran Park looking out towards the sea.

A circular tiered water feature will replace the old reservoir/pond. “This space is for people of all ages to use and enjoy.”

The underground carpark will have about 100 public spaces. Parking rates have not been decided yet.