Leap cards can now be used for Dublin Bikes scheme 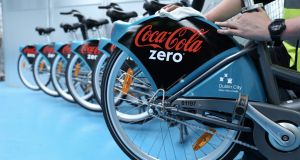 The public bicycle rental scheme, which now also operates in Belfast, Cork, Galway and Limerick, has been used more than 2.3 million times across the country in the first six months of the year, with nearly 13,000 journeys made each day.

People can use their Leap card to use the Dublin Bikes rental scheme from Tuesday.

The new initiative will allow new and existing bike share members to use the service using the smart card. However, users will not be able to pay for their bike trips from their Leap card account.

The service will allow people to hold their registration details for both schemes on the one card.

The Leap card, which is an integrated ticketing system for travel on public transport that was introduced in 2011, can also be used on the Dart and commuter services, Dublin Bus and Luas.

The public bicycle rental scheme, which now also operates in Belfast, Cork, Galway and Limerick, has been used more than 2.3 million times across the country in the first six months of the year, with nearly 13,000 journeys made each day.

The scheme in the city currently costs €1.9 million a year to run, with subscriptions and usage charges coming to €1.2 million.

Coca Cola pays €312,000 for its Coca-Cola Zero advertising on the bikes and bike stations, with the council covering the shortfall.

Lord Mayor of Dublin Brendan Carr said the move would make it more convenient for bike share members to link with other modes of public transport.

“I have no doubt this will prove to be an attractive feature for commuters who want to use the one card to link their bike journeys with other sustainable public transport services, at various connection points across the city,” he said.

“With the bike scheme accessible on the Leap Card, people will have one less card to carry around,” she said,

New members should go to dublinbikes.ie where they will be asked to choose either a Leap card or membership card.

Questions and answers from the operators

1. Can I have a Dublin Bikes annual card and a Leap card associated with my account at the same time?

No. You can only have one card associated with your account at any given time.

When taking out a bike at a station terminal Dublin Bikes card holders should hold their associated card (Bike share membership card or Leap card) up to the card reader on its own, and not in a wallet or purse containing other cards to avoid potential “card clashes”. Holding a purse or wallet up to the reader will likely result in a message saying that their subscription is not associated with their card and they will not be able to proceed due to interference from other cards. If a member is receiving this message even after removing their card from a wallet of purse, then they should contact the Dublin Bikes call centre on 1850 777 070.

3. Can I pay for my Dublin Bikes membership card annual renewal, three-day ticket and bike journey costs at leapcard.ie ?

No. You will continue to use www.dublinbikes.ie to pay for all costs relating to usage and membership.

4. Will I use leapcard.ie for any service relating to Dublin Bikes?

No. For convenience Leap card just allows you to use the one card for journeys taken on covered public transport modes and the bike-share scheme.

5. How do I associate and use a Leap card to access Dublin Bikes?

6. Can Dublin Bikes affect the balance on my Leap Card e-purse?