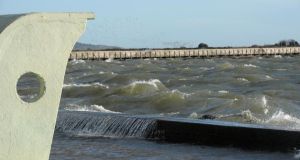 High tide at Clontarf, Dublin, last Friday. “The impact of sea-level rise will be most apparent in the major cities of Cork, Limerick, Dublin and Galway.” Photograph: Dara Mac Dónaill/The Irish Times

Storms at sea are nothing new, but to be battered by them repeatedly over a short period of time as Ireland and Britain have been in recent days is relatively novel – and likely to become more frequent as a result of changes in the Earth’s climate.

Six years ago, a study by researchers at Met Éireann and UCD’s meteorology and climate centre showed that storm surges would increase in frequency around all Irish coastal areas over the next few decades, by up to 20 per cent in the west.

It also predicted a significant increase in the height of extreme surges along the west and east coasts, with most of these occurring in wintertime as a result of changes in extreme wind speeds and mean sea-level pressure – or “spring tides”.

Climatologists are becoming more convinced that the overall trend of declining Arctic sea ice may be a contributory factor in changing the North Atlantic Oscillation – the difference in sea level pressure between the Icelandic Low and the Azores High.

“Trends in extreme coastal high water across the globe reflect the increases in mean sea level, suggesting that mean sea-level rise rather than storminess is largely contributing to this increase,” according to the European Centre for Climate Adaptation.

“Under future scenarios of global warming, the current 100-year extreme water level is likely to occur every one to two years with the sea levels predicted for 2100,” it says. (This is based on a projected rise of 48cm in sea levels by the end of the century.)

In Ireland, it notes, flooding is usually associated with heavy rainfall. But coastal flooding events, such as those experienced in recent days, also have devastating effects – “particularly those associated with storm surge events that occur in combination with spring tides”.

“Areas in the south of the country are likely to feel the effects first, particularly low-lying coastal locations with little or no natural protection ... The impact of sea-level rise will be most apparent in the major cities of Cork, Limerick, Dublin and Galway. ”

It cites the Environmental Protection Agency’s “sensible approach to coastal management for sea-level change”, including no new development within 100m of soft shoreline, no further reclamation in estuaries and no removal of sand dunes or beach gravel.

In some areas repeatedly battered by storm surges, the agency has said that a policy of “planned retreat” from the coastline could offer the best economic solution – although this obviously would not apply to cities. A similar policy is being pursued in Britain.

Sir David King, former chief scientific adviser to the British government, recalled this week that a report he had done in 2004 predicted that storm surges would penetrate further inland, affecting cities and causing billions of pounds a year of economic damage.