Laois and Offaly, I take it all back 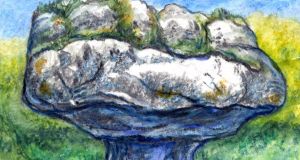 Quirky: a limestone mushroom sculpted by the lapping waves of a vanished lake. Illustration: Michael Viney

For a long time, for me, the midland counties were just a wearily protracted obstacle between Dublin and the west: in the days before motorways, a slow ticking off of dull little towns on a lot of flattish land drained by sluggish rivers; more lately, a whizz between video-game verges, with nowhere in sight to pee.

In that frame of mind, a new book called simply The Geology of Laois and Offaly would not, perhaps, have greatly excited my aesthetic anticipation. Its author, John Feehan, changed all that. He not only convinced me that living in Birr is a rewarding and even adventurous thing to do but has also led me memorably through his ecological backyard, from the leafy defiles of the Slieve Blooms (my first hen harrier) to the sinuous, flowery ridges of the eskers, offering fresh draughts of knowledge and enthusiasm at every turn.

Dr John Feehan, formerly of University College Dublin, does not, of course, write dull books – or, for that matter, small ones. The Geology of Laois and Offaly follows a succession of magisterially informative volumes on Ireland’s bogs and farming history, grasses and wildflowers. The hardback heft of this one is typical – 400 foolscap pages – and its rich illustration reflects support from several enlightened sources. It is published by Offaly County Council in association with Laois County Council and the Geological Survey of Ireland, with more, admirable funding from the Heritage Council.

But what, exactly, is so special about the rocks of Laois and Offaly, apart from their presence in the author’s geological bailiwick? Most of Offaly, like much of the midlands, is covered by Lower Carboniferous limestone, and the older red sandstone of the Slieve Bloom uplands, straddling the two counties, takes even more dramatic form down in Cork and Kerry. There is, of course, the exceptional uplands coalfield of the Castlecomer Plateau, the basalt root of a volcano in Croghan Hill and those quirky limestone mushrooms sculpted by lapping waves at the edge of vanished lakes.

In some hands, perhaps, such well-bounded contrasts might have been enough. But this is to reckon without the author’s remarkable scope of mind, one that reaches out from the physical birth of the universe to the local, parochial stones of holy wells and high crosses, from the drift and thrust of global tectonic plates to the fossils and flagstones of local quarries. Such a lively marriage of Earth’s wider rock history and its expression in landscape and local life is an exceptional achievement.

I can imagine myself at, say, 14, finding this in a bookcase and thrilling to the pictures of Jurassic sea dragons, the sparkling minerals and weird fossils, and the boldly evocative drama of Jock Nichol’s paintings of the changing eras. I might not have absorbed a whole lot of the story, but I’d have gone down to Brighton’s pebbly beach with quite a different eye.

And now how accessible is its geology to oldies, like me, who still find the language of the rocks the least inviting and amenable of all the earth sciences? The author has done his best, but not without “a modicum of technical vocabulary”. So one journeys on, with willing heart, happy enough, perhaps, with “metamorphosed” and “orogeny” but slowing down at “accretionary prisms” and “indurated till”.

There are wonderful natural places tucked away in Feehan country. Killeshin, in Laois, for example, has a splendid ruin of a medieval church, but also a magical, shadowy glen of rushing water and sculpted terraces of rock. “Go alone, if you can,” writes Feehan, “the first time you seek it out, before you bring others to share this opening into another world.”

Geologically, the excitement is the Killeshin Siltstone Formation, an almost uninterrupted succession of shale and sandstone spanning several million years of earth history. But in this author one can sense an almost animistic feeling for genius loci, the pervading spirit of a place.

A revealing passage discusses “harmony in natural landscape”, in which a slowly changing balance of interaction between rock, water and vegetation “awakes an echo of the natural human response to that harmony in our consciousness”. This “attunement” operates especially “in the mind and spirit of individuals particularly sensitive in this regard”. What’s more, he insists, “there is nothing random or accidental, and nothing imagined about the elements that enter into the composition of a particular landscape that is aesthetically pleasing – a mountain stream in Slieve Bloom or Slievemargy for example. It could not be any other way.”

We used to have a place like that: a dip of the boreen beneath the mountain river, a sparkling, sometimes surging, always inspiriting threshold to the shore. But the county council buried it with a bridge to the new car park, and now the river seems to have run dry.