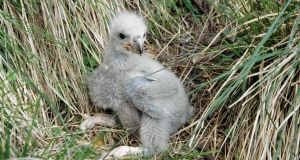 Sea eagles (like that, above, pictured in Scotland) have been introduced into the Killarney National park from Norway. File image: RSPB/PA

An eagle chick, the first to have hatched on a lake island in Killarney in over 100 years and which was being closely minded by local anglers, has not survived.

The white-tailed sea eagle chick had hatched on Brown Island near the western shores of Lough Lein, Killarney’s largest lake.

The National Parks and Wildlife Service had placed warning signs on the island asking that the nest not be disturbed.

It is suspected crows killed the chick - and there may have even been two chicks in the nest - as a result of the adults leaving it unguarded after being disturbed.

A second nest disturbance, this time at the incubation stage, possibly by a drone or kayakers, has occurred at Mountshannon in Co Clare, according to the project organisers.

They have asked the public to keep away from nest sites to avoid any interference.

“The Mountshannon pair of sea eagles has successfully reared chicks over the last three years but has failed to hatch its eggs in 2016.

“Disturbance at the nest at some stage during incubation is likely to have caused the eggs to become chilled leading to the death of the embryo. While the adults continue to sit on the eggs they will likely desert any day.

“Anecdotal evidence suggests that people had landed on the nest island on at least one occasion and a drone was also seen in the vicinity of the nest, “according to a statement.

“Anyone who wants to see sea eagles can safely do so without causing disturbance by visiting the public viewing and information point at Mountshannon, Co Clare, which is now open for the summer and managed by the local community.

“Eagles can also often been seen on the Gap boat trips to Lord Brandon’s Cottage in Killarney where boatmen are keen to point out the birds,” Dr Allan Mee project co-ordinator said.

It is illegal under the Wildlife Acts to disturb the nesting eagles, he also warned.

A number of other hatchings have taken place this year and at least two are surviving.

The eagles have been introduced into the Killarney National park from Norway and have flown as far as Scotland.