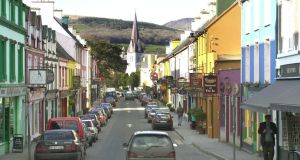 The site extends from the shores of Kenmare Bay, along the banks of the Finnihy River, close to Kenmare town in Co Kerry. Photograph: Don MacMonagle

Kerry County Council is to buy 50 acres in Kenmare from Nama – including a site that had been tipped to become a second town at the height of the boom.

The 50.3 acre site, known as the peninsula lands, extends from the shores of Kenmare Bay, along the banks of the Finnihy River, to close to the town centre.

The council is not revealing how much it offered for the site.

It was previously zoned for housing adn amenity, but is now zoned for amenity, residential and general rural use.

Fine Gael councillor Patrick O’Connor-Scarteen said the decision to buy the site is “a golden opportunity for Kenmare” and the site will be suitable for a number of uses. “All going well”, the land could become to Kenmare what the national park is to Killarney, he said.

Mr O’Connor-Scarteen said council management told him this week the bid for the property had been accepted by Nama, and it was now hoping to complete the legal process, but that it had some distance to go.

It was expected to fetch €11 million.

Flagged before the auction as “one of the most desirable tracts of land in the country”, the agricultural land owned by brothers Patrick, Joseph and John Arthur, had also housed a former saw mill and had direct access to the seafront as well as to the town centre.

The land was sold to Conor Slattery of Sigma Private Equity Ltd who said he was acting on behalf of a number of private clients and would be managing and developing the property for them.

On the Kenmare Bay seafront side, the proposal was for a promenade, a plaza, a courtyard terrace, commercial and retail units and town houses and duplexes; while nearer town, 300 residential units were proposed, along with four public car parks, more retail units and a bar.

The proposal sparked division in the town and a number of meetings objecting to the plans were held.

There were fears Kenmare town, which had experienced considerable housing development during the boom, would be dwarfed .

Planning was refused by the council and appealed by the applicants to An Bord Pleanála.

The board also refused permission, saying the developments were premature because of water and road infrastructure.

The site is one of only 12 properties Kerry County Council has assessed as suitable from Nama, out of a total of 219 flagged to it by the agency.

Mr O’Connor-Scarteen, a member of the Kenmare Community Amenity Group, has been campaigning for a recreation area on part of the lands near the sea for a number of years.

He said it is suitable for a number of uses, including social housing for the elderly, allotments, a community hall, a boathouse for the rowing club, a children’s playground and public toilets for the pier.