With eyes firmly on the climate change talks in Paris, Irish school children from Sooey National School and Belmullet Senior National School explain what it means to them 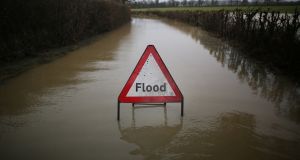 Several roads across the country closed due to the conditions. Photograph: Peter Macdiarmid/Getty Images

Heavy rain earlier on Thursday has led to flooding in a section of the Jack Lynch Tunnel in Cork causing major traffic delays on the Southern Ring Road circling the city.

According to Gardaí, flooding led to the closure of one of the two lanes in the northbound bore of the tunnel reducing traffic flows and causing major delays.

It is understood that one of the two lanes had to be closed around 5pm leading to a major build up of traffic on the eastbound lane of the Southern Ring Road.

Traffic heading north towards Fermoy, Mitchelstown and Dublin and east towards Midleton, Youghal and Waterford built up from the tunnel all the way back to the Kinsale Road Roundabout.

Traffic delays were still being reported on the eastbound lane at 10pm but the southbound bore of the tunnel was unaffected so traffic heading south and west on the N40 was not affected.

Elsewhere in Cork, heavy rain led to spot flooding and road closures in Cloghroe in mid-Cork, Killavullen in north Cork and Belgooly in south Cork as well as some roads around Mallow.

Several roads in other areas of the country also closed.

Drivers are urged to take care on the N25 Waterford/Cork Rd at Garribane where traffic is down to one lane, while the N77 Kilkenny/Portlaoise Rd is flooded at Dinan Bridge.

According to AA Roadwatch the M9 Waterford/ Dublin Rd has fully reopened at J3 Athy and J2 Kilcullen after earlier flooding receded.

Further road warnings can be found on the AA Roadwatch website.

A status yellow wind warning has also been issued with southwesterly winds of 45km/h-65 km/h expected with gusts up to 100km/h on Friday and Saturday.

The Road Safety Authority is advising the public to check local weather and traffic reports and heed any advice from local councils and An Garda Síochána regarding road conditions.

The authority is also advising drivers that: “It takes longer to stop a vehicle on wet roads so slow down and allow extra distance between you and the vehicle in front, four seconds at a minimum (use the two-second rule and repeat it twice).

Met Éireann say the weather will be dry into the early part of Thursday night before showers begin to spread from the west as the night goes on and get heavier on Friday.