Is Ireland throwing in the towel on climate change? 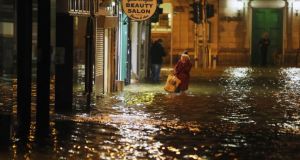 ‘We emit approximately 15 tonnes of carbon dioxide equivalents per person each year, which is more than twice the corresponding figure for China and some 10 times the estimate for India.’ Above, a woman walks through flood water in Cork city in February. Photograph: Niall Carson/PA Wire

While climate scientists and meteorologists are usually reluctant to assign causality of any particular weather event to global climate change, the recent extreme storms and flooding in Ireland are similar to those forecast for a warming world.

However, it is disturbing that the changes needed to protect against the inevitable consequences of climate change, such as improved drainage and better flood defences, have gained far more attention than those that could be made to limit climate change and so prevent its worst effects. It feels as if we are throwing in the towel in the fight against this environmental threat and are accepting we need to prepare for more of the same disturbed weather in the future. There is a significant risk attached to such thinking.

As far back as 1992, when the United Nations agreed a framework convention on climate change, governments around the world recognised the risks posed by an altered climate. A protocol to strengthen the convention was added in 1997 in Kyoto and this set limits on the amount of greenhouse gases the “developed world” could emit from 2008 to 2012.

The European Union led the world in setting challenging targets for the member states and introduced a cap and trade scheme for industries emitting large quantities of carbon dioxide.

Looking back, it appears this scheme was a failure because industries were given allowances free and governments were too generous in the quantities they gave. So the price of carbon on the trading market was suppressed and never sustained the levels that would prompt industry to invest in new technology to reduce overall emissions. The developed world also outsourced much of its manufacturing to the so-called developing world, mainly China, and so global emissions of greenhouse gases continued to increase.

This failure to reach agreement is happening despite regular reports from the scientific community, in the form of the Intergovernmental Panel on Climate Change, that are growing more alarming with each report. The consequences for average global temperatures and sea levels of increasing greenhouse gas levels are predicted and the potential outcomes are stark.

In most areas of environmental degradation when the source of the pollution is reduced or eliminated the problem is usually resolved with time. Climate change is different because there are tipping points in the climate system beyond which there is no chance of recovery for a long, long time. One such point is the melting of the ice that sits on Greenland. This ice is 2,000 metres deep on average and, if it melts, average sea levels would rise by some seven metres.

The United Nations aimed to limit average temperature increases to 2 degrees above pre-industrial levels. It is now widely accepted that we have little chance of achieving this target, due to the amount of greenhouse gases already in the atmosphere and the rate of increase in the global use of fossil fuels. The longer we wait to tackle the problem the more expensive it will become and the more extreme will be the consequences.

Several commentators have referred to Ireland’s small contribution to the global greenhouse gas load and implied we should leave it to the large countries to address this problem. However, the significant figure is the emissions per capita. Ireland’s are high.

We emit about 15 tonnes of carbon dioxide equivalents per person each year, which is more than twice the corresponding figure for China and some 10 times the estimate for India. Surely, in equity, the biggest emitters should be the ones to make the biggest effort at reduction? The Irish figure is high because of the large emissions of methane and nitrous oxide from our agriculture sector and these are set to increase further as EU quota changes take effect in the coming years.


Wind energy potential
There is much we could do if we prioritised this threat. Our renewable wind energy potential is among the best in the world. We should develop this in partnership with local communities and build a smart electricity grid to realise the potential.

Using that electricity, and appropriate economic incentives, we could electrify our transport fleet in a short period of time. The money saved on fossil fuel purchases from Russia and the Middle East will stay in the Irish economy and generate jobs. Our agricultural waste streams could be used to generate methane fuel that can be fed into the gas network or used as fuel in local transport.

Such systems are widely used in other countries in Europe and the technical knowledge of such systems exists in our third-level institutions. The city of Lille in France powers hundreds of buses and other vehicles with bio-methane from sewage sludge and municipal grass cuttings. Our cutaway bogs could be seeded with sphagnum and become carbon sinks once more as they were prior to peat harvesting. We could increase our forest cover which, at 11 per cent, is the lowest in Europe. We could hold a meaningful debate about nuclear power and make a decision on this issue one way or the other.

It’s time to turn the focus on how we in Ireland can reduce our greenhouse gas emissions while accepting that we have to adapt to changes that are unavoidable.