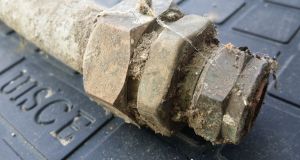 Irish Water says it plans to spend €370 million over the next decade replacing lead pipes and at least €78 million more treating water to stop lead contamination.

The utility is today publishing a draft Lead in Water Mitigation Plan, which will be available for public consultation until September 21st, and is urging owners of houses built before 1980 to check internal plumbing for lead pipes.

About 180,000 homes are served by lead pipes, Irish Water estimates, and are at risk of not meeting the EU safe drinking water standards.

Consumption of lead can affect brain development, with young children, bottlefed infants and “babies in the womb” deemed most at risk.

Drinking water supplies do not contain lead when they leave treatment plants and there are no longer any lead water mains, Irish Water said.

However, for many years lead was used in “service connections”, the pipes running from the public mains to houses, and routinely used in the plumbing of homes up to the mid 1970s.

Of these, about 40,000 are supplied from shared backyard lead pipes, typically in estates built in Dublin from the 1940s to the 1960s, and Irish Water has agreed to also replace these.

The remaining lead pipework will have to be replaced by the homeowner, Irish Water said; however, it does not expect all homeowners will follow this advice.

“While full lead replacement is the best option, this has taken decades in other countries,” Jerry Grant, managing director of Irish Water said.

This involves adding orthophosphate, which Mr grant said is “food grade product”, to the supply to form a protective film on the inside of the pipe, providing a barrier between the water and the lead.

Irish Water estimates the capital costs of establishing the “orthophosphate treatment” at €78 million, in addition to the €370 million pipe replacement cost.