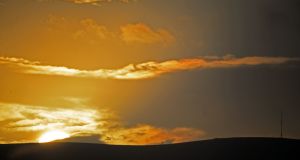 Towns and cities across Ireland have been named and shamed by the World Health Organisation (WHO) for breaching safety levels for air pollution. File photograph: Eric Luke/The Irish Times

Towns and cities across Ireland and Britain have been named and shamed by the World Health Organisation (WHO) for breaching safety levels for air pollution.

Poor air quality is a major cause of disease and death, the WHO warned.

One way the global health body assesses air quality is by examining the levels of a type of pollution known as particulate matter (PMs).

And more than 40 towns and cities across Ireland and Britain breached the safe levels for another measure known as PM2.5.

The urban areas in Ireland that have breached the safe levels for these fine particles are Longford town, Armagh, Bray, Belfast, Derry, Galway and Dublin.

WHO said that across the world 80 per cent of cities that measure outdoor air pollution are failing to meet its guidance for safe levels of air quality.

As air quality declines, the risk of stroke, heart disease, lung cancer, and chronic and acute respiratory diseases, including asthma, increases for the people who live in these areas, the health body said.

It said that ambient air pollution, made of high concentrations of small and fine particulate matter, is the greatest environmental risk to health - causing more than 3 million premature deaths across the world every year.

Dr Flavia Bustreo, the WHO’s assistant director general for family, women and children’s health, said: “When dirty air blankets our cities, the most vulnerable urban populations - the youngest, oldest and poorest - are the most impacted.”

Dr Maria Neira, director of the department of public health, environmental and social determinants of health at the WHO, added: “Urban air pollution continues to rise at an alarming rate, wreaking havoc on human health.

“At the same time, awareness is rising and more cities are monitoring their air quality. When air quality improves, global respiratory and cardiovascular-related illnesses decrease.”