Hundreds of swimmers take a dive for Dublin’s Liffey Swim

257 men and 111 women who took part in the 95th annual Liffey Swim on Saturday, September 14th. Ger Wilkes was the first man back and Rachel Lee won the women’s race. 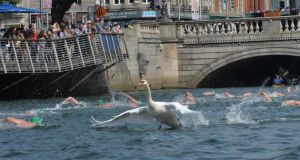 A flock of swans join the swimmers. Photograph: Alan Betson / The Irish Times 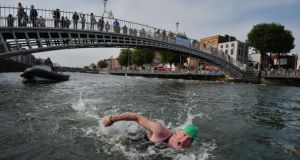 In total 361 Swimmers registered to take part in the race. It included 252 men and 109 women over the 2.2km.Photograph: Alan Betson / The Irish Times 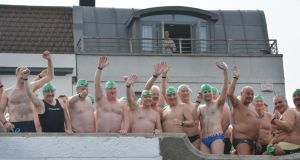 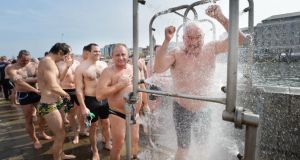 Renaissance men and women they may not all be, but many of the 257 men and 111 women who took part in the 95th annual Liffey Swim were inspired by Jack B Yeats painting of the same name.

David Wheelahan, originally from Melbourne, Australia and now a member of Sandycove swimming club said he had seen the painting years ago.

Standing among hundreds of other men in Speedos as they all waited to get down from the quays at Guinness brewery and onto the diving pontoon, he said he had wondered when he moved to Dublin in 1998, whether the swim still existed.

“I’ve done it almost every year since.”

The men queued first to set off on the 2.2km swim.Women queued for their swim from Rory O’More Bridge and finishing at Loopline Bridge at the Customs House.

The swim takes place as the tide is coming in up the river.

Gus Cooney, who was managing the event yesterday, explained the swim started in 1920 by Dublin Corporation employee Bernard Fagan.

“He wanted to prove to the citizens of Dublin that their river was safe to swim. So he and about 20 friends had the first race in July that year and it’s grown and grown since. What better way to see your city than from the river, swimming past the Four Court, the Hal’penny Bridge? Swimming under O’Connell Bridge, it’s 50 m wide which is the length of an Olympic swimming pool. There are lights now, but it’s dark under there.”

In 1991, the women’s race was added and the event is regarded as the highlight in a season of 26 open water races held during the summer.

To enter one must be a member of a swimming club and to have swum in at least four open water races during the year.

As the men dived in, in their threes and fours – each swimmer is assigned a time handicap according to their proficiency – and set off up-river the sight of their swimming caps bobbing and arms and legs splashing put one in mind of salmon swimming upstream to their spawning grounds, such was their enthusiasm.

Crowds leant over river walls and bridges along the way cheering them on, while some supporters jogged along foot-paths cheering on their man or woman, all the way through the city-centre.

First man home was Ger Wilkes, from Malahide and a member of North Dublin swimming club.

“The hardest bit thinking people are coming up behind you, thinking, ‘Am I doing enough?’ I knew I was in the lead from about the Hal’penny Bridge. It was only a matter of hanging on then. O’Connell Bridge is liking going through a big dark tunnel, but it’s great. I put a lot of training in during the year, so I’m delighted, but shattered.”

Rachel Lee, a member of Guinnness swimming club and a paramedic with Dublin Fire Brigade (DFB), was greeted by cheers from many of her colleagues on duty by the quayside, as she came in first in the women’s race.

“I can’t believe it. I’m delighted,” she said. The hardest moment for her, she said, was “finding the finish point at the end”.

“I want to go home now and kiss my babies, twins, they’re two and I wish they were here. Then there’ll be a few drinks later.”

Almost all completed the swim, though a number had to be taken from the water by DFB water rescue.