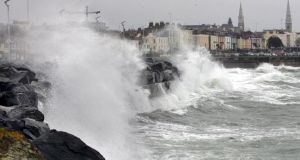 Met Éireann issued an nationwide orange alert for wind gusts of up to 130km/h in some western and southern coasts. File Photograph: Eric Luke/The Irish Times

The high winds and blustery conditions which left many homes without power today are expected to continue this evening and tonight.

The public has been warned to take extra care and avoid exposed coasts, especially in the west and north, which has borne the brunt of the storm conditions today.

Met Éireann issued a status orange alert for counties Donegal, Galway, Leitrim, Mayo, Sligo, Clare, Kerry and Limerick, where winds have been gusting between 100 and 130km/h .

High seas and high waves will pose an additional threat to coastal areas, the forecaster has said, with occasionally heavy, thundery downpours of rain and hail expected.

A yellow alert has been issued for Leinster, Cavan, Monaghan, Roscommon, Cork, Tipperary and Waterford, where blustery conditions will also continue overnight. Heavy showers could lead to spot flooding in places.

ESB teams are working to restore electricity to around 500 homes which remain without power after high winds led to widespread outages in counties Galway, Mayo, Cork and Tipperary today.

Motorists have been advised to drive with extra care, to slow down, and to keep a safe distance from the vehicle in front. Those driving high-sided vehicles are being asked to take particular care on exposed roads or over high ground.

Drivers have also been asked to be mindful of motorcyclists, cyclists and pedestrians and the strong possibility of debris on roads especially less travelled routes.

Strong southerly winds veering southwest to west are expected during the morning and may increase to gale force later on.

Widespread rain in the early morning is expected to clear quickly eastwards but with will be followed by “frequent squally showers,” mainly of rain or hail, but some wintry later today, especially over high ground. There is also a risk of thunder.

AA Roadwatch said drivers who encounter spot flooding should not attempt to drive through standing water unless they are “absolutely sure” that it is not too deep.

Temperatures are expected to drop with initial maximum temperatures between 6 to 10 degrees turning much colder, with values of just 3 to 6 degrees this afternoon.

It will remain “extremely windy” tonight and further damaging gusts are expected with strong to gale force westerly winds.

There will be a risk of hail and also some sleet and snow showers, especially over high ground.

“An additional hazard will be high seas and waves, which will be highest during Sunday afternoon and Sunday night. Occasional heavy, squally, thundery downpours of rain will occur at times too. Some flooding is possible also.”

The Coast Guard said it “strongly advises” the public not to go our on exposed coasts, cliffs, piers, harbour walls, beaches, promenades or any other coastal areas during the inclement weather.

“Huge waves can be whipped up by high seas. These waves can pose hazards to anyone close to the shoreline,” it said in a statement.

“The public should be extremely careful when venturing out in such conditions, they should check the weather forecast and remain away from exposed areas,” Irish Coast Guard manager Declan Geoghegan said.

It urged the public to avoid water sports and said owners of small vessels in coasts shoulf seek shelter.

Gardaí have warned motorists in westerly counties that driving conditions may be affected due to strong gusting winds, heavy downpours and possible flooding.