An Irishman’s Diary: On a Clare day, you can see a lot 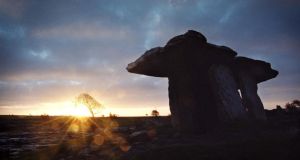 ‘The Burren was and remains one of very few places on the planet to feature “reverse transhumance”: farmers putting cattle out to upland pasture in winter, rather than summer.’ Photograph: Dara Mac Dónaill

The Burren’s annual wild-flower spectacular is running late this year. When I visited the site on Monday, the exhibitors were still only setting up, and we had to take the word of our guide, Tony Kirby that, within weeks, the area would be ablaze with colour.

Bad news for the bus-load of Americans, who by then would be back in Vermont and Tennessee. But at least they saw a preview, courtesy of the show’s headline act, the spring gentian, whose brilliant blue costume peeped out here and there.

The early purple orchid made an appearance too. And in one small patch of ground they were joined by the mountain aven, an Arctic rose happily rubbing petals with Mediterranean plants, one of the Burren’s specialities.

Nearby, meanwhile, a clump of heather – a species normally well known for its detestation of calcium – was thriving on the limestone plateau. So at least the US visitors went home with a sense of the colourful anarchy impending.

In any case, the Burren is not all about flora. Although famous as a natural wonder, it is also shaped by millenniums of human activity, much of which would now be considered vandalism. The effects of ancient farming practices are everywhere. And some of those practices are still with us.

The Burren was and remains one of very few places on the planet to feature “reverse transhumance”: farmers putting cattle out to upland pasture in winter, rather than summer. It works there because, among other things, the limestone pavement is a natural central heating system.

The cattle express their gratitude, indirectly, in the form of cowslips. And in fact, generally, the grazing is welcomed by Burren conservationists, because its helps restrain the advance of scrub, including the native hazel woods, now threatening a comeback at the expense of flowers and monuments.

Through his walking tours (heartofburrenwalks.com), Tony Kirby covers all the area’s many aspects. But as it happened, the Americans present were chiefly interested in spiritualism. So our tour also included a visit to the hermitage of St Colman Mac Duagh.

This is the classic pagan-Christian combination of church, holy well, and rag tree (the hazel branches recently dressed with ribbons, by pilgrims of unspecified faith). The hermit’s cave too is still open to visitors. And although the horse-hoof shapes in rock nearby are probably the natural result of rain-water, they do of course come with a legend.

The story is that the saint once took pity on his hungry manservant and prayed for food. His prayers were answered, dramatically, to the detriment of a royal feast in Kinvara, where the dishes suddenly rose from the table and travelled by air to the hermitage. The king’s men pursued, whereupon the saint prayed again, the horses’ hooves got stuck in rock, and the servant ate.

Unfortunately, St Colman’s take-away service was not available the day we visited. So later, instead, we went for lunch at Lisdoonvarna’s Roadside Inn, which was an education it itself. Run by local man Peter Curtin and his Swedish-born wife Birgitta, the pub is a hive of creative industry, although this wasn’t immediately obvious.

When we arrived, the gregarious proprietor was enjoying a pint of his own Burren stout, one of several products of an on-site microbrewery. He was, we learned, celebrating a visit earlier from a group of overseas beer experts, at least one of whom had declared the stout the best he’d ever had.

I was driving, sadly. So short of a taste-and-spit session, I had to confine myself to a thimbleful. But it was damn good, and so was the ale. It was a source of regret I couldn’t buy any to take home. They don’t bottle it.

Then there was Birgitta, who in 1981, as an 18-year-old on a trek across Europe, made the fateful mistake of meeting Peter in an Irish bar. She doesn’t appear to regret it, yet. And some time during her subsequent hibernicisation, clearly, she has tasted the legendary smoked salmon of knowledge.

At any rate, her Burren Smokehouse, another offshoot of the pub, has risen to global fame, producing meals fit for royalty (Queen Elizabeth II, specifically, during her Irish visit) and for the own-brand franchise of Fortnum & Mason.

Nor does the creativity end with food and drink. Frank Zappa once defined a self-respecting country as one that had “a beer and an airline”. The equivalent for a modern Irish town, arguably, is a microbrewery and a literary festival.

Local claims that the Burren was a model for Middle Earth might be stretching it – a subject to which I’ll return. Still, at the very least, the Burren’s other-worldliness seems a good match for Tolkien’s. Besides which, the festival (burrentolkiensociety.ie) isn’t all about literature. Not least among the highlights will be the launch in Lisdoonvarna tomorrow of a magical potion called “Hobbit Ale”.