Greener and leaner EU likely to cost more in taxes 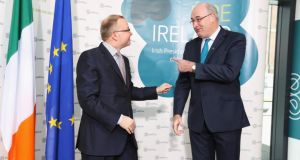 Plans are under way for a leaner, greener more self-sufficient EU, but they are likely to cost more in taxes.

Minister for the Environment Phil Hogan said Ireland had shown the way in a number of respects, and pointed to proposals to bring in a new carbon tax on solid fuel by May 1st this year.

Mr Hogan said this built upon other environmental taxes such as the changing of the way car tax was calculated from engine size to carbon emission levels, which he recalled had been inaugurated back in 2008.

Speaking at a press conference after the informal ministers’ meeting, Mr Hogan also said he wanted to see more clarity on environmental labelling of products across the EU.

Mr Potocnik said that the conclusion to the EU’s environment and climate discussions was “pretty straightforward and simple”.

It was of the “utmost importance” that the EU use less energy and resources.

He said Europe’s population would grow more in one generation than it did in the previous century, and quality of life was an issue that needed to be addressed.

Mr Potocnik instanced air quality as a factor which was responsible for the premature deaths of 420,000 people in 2010, and which was impacting hugely on quality of life.

While there was a need to improve the standards of acceptable air quality, “the majority” of EU states were not compliant with existing standards.

Ms Hedegaard said the EU was spending€1 billion a day on imports of oil and this was clearly unsustainable either in energy security or in terms of carbon emissions.