Green bin a waste of money for collectors

Value of recyclables down in a struggling global market 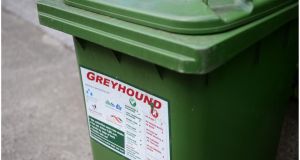 In the Dublin local authority areas the green bin is seen as the “free bin” by most households, except customers of Greyhound, who use bags instead of bins and since last December must pay €9 for six recycling bags. Photograph: Bryan O’Brien

In the sometimes murky world of waste disposal there is one service that has always been held out as a success story – the provision of dry mixed recycling, more commonly known as the green bin collection.

A decade ago these bins, used by householders to dispose of paper, cardboard, plastic and tins, were available in fewer than 10 local authority areas. Now, according to the Environmental Protection Agency (EPA), more than 98 per cent of households which are availing of a waste collection have a green bin.

The difference to Ireland’s recycling rates over this same period has been phenomenal. In 2002 just over a quarter of used packaging was saved from landfill; that figure is now about 80 per cent, surpassing the 2011 EU targets for packing recovery of 60 per cent. The supply of green bins to households has had a substantial influence on this improvement. In 2002, 7,500 tonnes of packaging waste was collected from domestic recycling bins. By 2011 this had increased to 115,000 tonnes.

From these figures the roll-out of the recycling bin appears to be an unqualified success, but in fact the green bin is not without its costs.


‘Free bin’
In the Dublin local authority areas the green bin is seen as the “free bin” by most households, except customers of Greyhound who use bags instead of bins and since last December must pay €9 for six recycling bags.

In some other local authority areas there is a charge for the recycling bin. The level of this charge depends on where you live and which waste collector you subscribe to, but in all cases the recycling bin will be the cheapest household bin.

Even where there is no charge for the collection, the word “free” is a misnomer, as no household will have a green bin collected if they don’t pay their annual subscription fees.

The expectation that the green bin should be free or offered at a very low cost comes from the idea that what’s put in the green bin is seen as having a value to the collector or processor of that material.

The truth is that sometimes it does, and sometimes it doesn’t. For waste firms solely in the collection, and not the processing, end of the waste business, the green bin is currently costing money, according to Niall Killilea, managing director of City Bin.


Paying for disposal
“At the moment we’re paying to dispose of the contents of the green bin. We haven’t been paid for it since early last year. We’re paying between €20 and €30 per tonne, but it’s up and down from month to month.”

Whether collectors like City Bin are paid for their lorry of recyclables or have to pay to get rid of it is decided by the operators of the Materials Recovery Facility MRF who process the green bin offerings.

The decision is based on what the MRF operators can get when they sell on the waste, and whether the cost of processing it is more or less than what it goes for in the markets.

“At the moment we’re charging a €20 gate fee per tonne; last year we were paying €25 per tonne. The reason the value of the recyclables is low at the moment is the global commodities downturn,” says John Dunne, manager of Panda Waste, which operates the largest MRF facility in the country at Ballymount in Dublin.

The “stuff goes everywhere”, Dunne says, depending on the price that can be achieved. The perception that everything is going to China is incorrect. Britain and Europe are the largest markets, with less than 25 per cent going to India and Asia, according to Repak, which runs the national packaging levy scheme.

Repak has a vital role to play in the process, because the levies it collects from the manufacturers of the packaging are the only thing keeping the system afloat. It is reluctant to say how much it subsidises facilities, but industry sources say it equates to about €10 to €12 per household, per year.

“Without the Repak subsidy on the packaging element of the material, the entire collection and processing operations would not be viable,” says Dunne.

A tonne of aluminium, one of the most valuable substances in the bin, would be worth €800- €1,000, but this represents 60,000 cans, at 15 cent per can. The average collection of cans per household in Ireland is five to six. This would mean the value of cans would contribute less than 1 cent to the cost of the green bin.

The more lucrative waste steams of paper and metals are almost all shipped abroad. Less than half a per cent of the paper and cardboard taken from the bin stays in Ireland; just over 5 per cent of glass stays, but no metals.

There is a market for plastics, more than a quarter of which do stay in the country. A Monaghan-based company uses clear plastics to make a flake substance which is turned into textiles and a Galway company makes opaque plastics into granules, used eventually to make products such as agricultural drainage pipes.