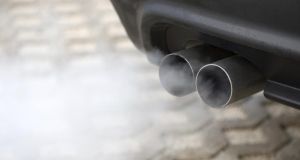 ‘A radical increase in energy efficiency can come if we share lots of data about how we run our cars, offices and homes.’ Photograph: Getty Images

We need to take a collective leap to a new way of living in this world. We need to halt the rise in greenhouse gas emissions, and then reduce them to a level that gives us a fighting chance of halting catastrophic climate change. The basic science is clear but everything else about the nature of this change is held back by fear and uncertainty.

We have scared the living daylights out of people about climate change but failed to give them a sense about what they can do to help in a meaningful way. Rather than tackling the problem at the fossil fuel source we have created complex market arrangements to tackle the problem from the consumer end first. Consumers have been left facing a dilemma as to whether every purchase they make is an ethical one, without creating the conditions where clean options become the norm.

Given that moral quagmire, many people have switched off from the issue and stopped listening to those who say this problem can no longer be ignored. The main political parties are finely tuned to that public reaction. They pay just enough lip service to the issue but no more.

The Taoiseach is attending the latest United Nations climate summit in New York this week. It’s organised as part of a lead up to critical UN negotiations in Paris next year, in an attempt to pick up the pieces of the global deal that fell apart at a similar gathering in Copenhagen in 2009.

First, every action it has taken over the last 3½ years has proven it has no intention of taking the low-carbon path. Its environmental credentials are already shot. Emissions are rising, mass-burn incineration is ready to go, our rail system is in tatters and investment in renewables is grinding to a halt.

Second, the wording of the Bill shows the Government has no real long-term ambition to do what needs to be done. If it was serious it would be committing to a complete decarbonisation of our power system in the next three or four decades. Making such a commitment would give a huge investment boost to the economy but it is something it is refusing to do.

Third, to make this transition work, we are going to need the right European, as well as national, regulation. European leadership on climate change has been one of the casualties of the financial crisis. If Enda Kenny wants to be taken seriously he needs to show up at the European Council next month and sign up to the following five-point plan which would demonstrate genuine intent.

1. Aim for a 100 per cent decarbonised power system by 2040. Irish environmental and climate justice organisations have written to the Taoiseach asking him to go for this goal. It’s an ambitious but achievable objective, and one which would give us first-mover advantage in developing climate solutions the rest of the world will want to buy. At the same time we need to divest from fossil fuels and keep any shale gas, oil, peat and coal reserves in the ground, where they belong.

2. Introduce a digital bill of rights. A radical increase in energy efficiency can come if we share lots of data about how we run our cars, offices and homes. People will share that information only if they know that their personal details are kept personal and not handed off as a gift for corporate use and control. A digital bill of rights is crucial to delivering an internet, clean energy and social revolution all in one go.

5. Engage in meaningful public engagement on the future use of our land. We need a proper national debate about how we want to face this climate challenge. In particular we need to consider how we can maximise economic output and rural development from the use of our land while at the same time reducing the level of emissions.

Such public engagement is the most important move the Government needs to make now. We should go into any public consultations with no preconceived notions as to what the outcome should be. We need to make sure there is a safe space where every view can be heard. By coming at it from a fresh start we could learn from the mistakes of the past and set our country on a safer more prosperous course. As our country starts on an economic recovery we need to make sure it is green. Tackling climate change is a leap forward, not back. Eamon Ryan is leader of the Green Party