Requirement for statutory certificates of compliance was imposed after Priory Hall 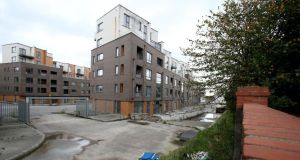 The Government has announced that regulations introduced last year to clamp down on poor quality building work are to be eased for one-off homes and house extensions.

Statutory certificates of compliance were introduced to end the system of self-certification by builders following the discovery of serious deficiencies in standards in some cases. The fire protection flaws uncovered at the Priory Hall development in north Dublin were one of the most high profile of these.

The regulations state certificates of compliance must be signed off by the designer prior to construction and by the assigned certifier and the builder when a building is complete. Since they were introduced, more than 6,000 homes have been built, 1,000 of which are one-off houses

Minister for the Environment Alan Kelly in April ordered a review of the regulations because of what he said were “outlandish charges” being sought for the inspections required under new system.

The review examined the first 12 months of the mandatory certification requirement, and Minister of State for Housing and Planning Paudie Coffey yesterday announced amendments to the regime.

He said the changes “remove the mandatory requirement for statutory certificates of compliance in respect of a new dwelling on a single unit development or a domestic extension”.

Owners including self-builders will in future be given the choice to opt out of statutory certification and are to be allowed instead to “demonstrate by alternative means that they have met their general obligation to build in accordance with the minimum requirements of the building regulations”.

Alternative means may include the opinions of building professionals and inspections by local authorities.

To ensure that building standards do not slip, a local authority inspection process is to be introduced. Mr Coffey said the Department of Environment would engage with the local authorities to ensure they develop the inspection capacity “over time”.

Mr Coffey said there would be with definitive targets and timelines to ensure progressive improvement by local authorities in all sectors including inspections of single dwellings, multi-unit residential developments and commercial buildings.

The mandatory requirement for certification will remain in place for all multi-unit developments.

Mr Coffey said he was satisfied the new arrangements would “level the playing field for individuals and families planning to build or extend their own home”.

He said such people would “no longer be held to ransom by excessive quotes for design and completion certificates”.

“Owners who wish to invest in statutory certification may of course continue to do so and I believe many will do so where reasonable and affordable prices can be obtained,” he said.