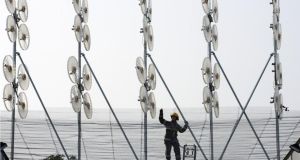 The Government could save €200 million a year within five years if it adopted a rigorous programme of using energy more efficiently in schools, hospitals and other public buildings, according to Friends of the Earth Dublin.

“Saving public money is a Government priority . . . yet Ministers are silent on cutting energy use in thousands of public buildings – in spite of official evidence that €120 million a year could be saved within two years and €200 million within five years,” it says.

‘Ignoring potential’
In a report entitled Cuts that don’t hurt, Friends of the Earth Dublin asks why Minister for Public Expenditure Brendan Howlin is “ignoring the proven potential for up to 20 per cent savings in Ireland’s estimated €500 million public-sector energy spend.

“That money is spent heating empty schools at weekends, powering computers all night and running many hospitals as if energy is cheap. It’s money we need desperately for home helps, disability services and teaching resources,” the report says.

It calls on Minister for Education Ruairí Quinn to require 4,000 schools to target 20 per cent savings a year under his department’s energy efficiency guidelines. “This would save €14 million a year – twice as much as cutting other capitation costs by 3.5 per cent.”

The report asks why Minister for Health James Reilly is “presiding over a spend of at least €85 million a year on HSE energy costs while existing projects show that a fifth of this could be saved for essential services”, thereby avoiding “so many unnecessary cuts”.

Savings of €1.75bn
Overall, it estimates the savings could add up to €1.75 billion over the next 10 years. This would cut carbon emissions and save money from importing oil, gas and coal as well as creating thousands of jobs in retrofitting buildings and releasing funds for essential services.

The Government’s updated National Energy Efficiency Action Plan targets savings of at least €500 million a year from reduced electricity and heating costs for more than 10,000 buildings run by central and local government as well as State companies such as the ESB. The plan claims that a fifth of the targeted 33 per cent reduction has already been achieved, cutting the public-sector energy bill by 6.5 per cent. But Friends of the Earth Dublin says no information is provided on which public-sector bodies have achieved these savings.

No publicity
It says that there was almost no publicity for the launch last November of a schools’ website, no circular sent to schools and no obligation on schools to save energy.

Similarly, all partnerships with the Sustainable Energy Authority of Ireland (SEAI) are voluntary.

Despite the plan’s pledge to “introduce an obligation on all public bodies to develop and implement energy management programmes”, there was no information on what this would entail, nor a date for its introduction or any statement on the “repercussions” of failure.

Neither had the promised “cross-departmental implementation group to deliver the actions contained in this plan” been set up. It does not say who it would involve or what its remit would be. An analysis by the SEAI of the top 100 energy users in the public sector has also yet to be published.