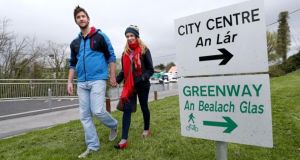 NUI Galway students Sarah Carthy and Shane Flynn on a section of the new greenway at the Fisheries Field in Galway city yesterday. Photograph: Joe O’Shaughnessy

The Government has allocated €2 million towards the first “greenway” for commuters rather than tourists along the track of the former Connemara railway line.

Up to 15,000 commuters between Moycullen on the Connemara border and Galway city could find themselves on two wheels rather than four within two years, Minister of State for Public Transport Alan Kelly has predicted.

The route, which will run through the NUI Galway campus and follow the now dismantled Galway-Clifden railway line close to the banks of the river Corrib, will extend for 12.4km.

Some 11.4km will be “off-road” on a three-metre wide walking/cycling “greenway”, with just one kilometre close to Moycullen church on a quiet local road, said Mr Kelly.

Landowners
Acknowledging that there could be “issues” with landowners, Mr Kelly said he hoped “commonsense would prevail” as his department was currently dealing with 38 applications for “greenways” from local authorities under the Government’s national cycle network programme.

Funding could go elsewhere if there was opposition to the Galway project, but he did “not envisage” this happening.

Development will be undertaken by Galway County Council.

Landowners who facilitate such routes have the right to refuse access at any stage, and the successful Great Western Greenway between Newport and Mulrany in Co Mayo had issues with several landowners over the winter, which have since been resolved.

Mr Kelly said the Galway application “stood out” due to its potential for reducing road traffic in one of the most car-congested cities in the State.

Further stages
He said the aim was to extend the route along 74km to Clifden in Connemara, and funding had been approved for feasibility for further stages.

A further “greenway” will be developed in Co Waterford running from Clonea along the coast to Durrow.

Mr Kelly predicted that the Galway-Moycullen cycle route would be completed in late 2015. He hoped to have the Galway city bike scheme up and running by August of this year.

“Once this opens we could have 5,000 people using this per day,” Mr Kelly said yesterday, including students attending schools in the city and the university.