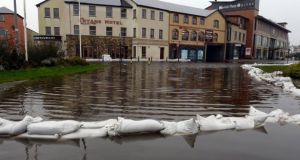 Thousands of people living close to the Shannon are frightened of further widescale flooding this winter, says Fianna Fáil.

Launching a Bill designed to help efforts to tackle the Shannon flooding, Fianna Fáil’s spokesman on Flood Relief Eugene Murphy, said that if the coming winter was not dry, the flooding would inevitably return worse than ever in the months ahead.

“The River Shannon is an immense natural resource for our country but as the frequency and intensity of flooding has risen over the past number of years it is clear that we need new measures to help protect vulnerable communities living along its banks,” the Roscommon TD said.

The short Bill, entitled Electricity Supply (Management of the River Shannon) Bill 2016 provides for a single agency to cut through the bureaucratic problems experienced over the years in tackling the problem of flooding along the river.

“This Bill addresses the concerns raised by various community groups and aims to update old legislation in order to ensure the ESB has full flexibility in setting water levels on Lough Allen, Lough Derg and Lough Rea,” said Mr Murphy.

He said this would lead to a more co-ordinated decision making process, free from legal constraints that would help maintain an adequate safe water level.

“Essentially the Bill removes specific water levels from legislation and allows the ESB to continue to use its own expertise to set these levels in conjunction with other relevant bodies such as Waterways Ireland, Inland Fisheries and local authorities,” said Mr Murphy.

“This Bill is not a silver bullet. There is no single solution to ease flooding along the Shannon, but our Bill can form part of an overall package of measures designed to address the difficulties communities on the Shannon are facing,” he added.

Mr Murphy expressed the hope that in this era of “new politics” the Government would support his Bill. He said action was long overdue as the last piece of legislation governing control of the river dated back to 1934.

He accepted that Fianna Fail governments down the years shared responsibility for the failure to deal with the problems caused by Shannon flooding, but he said that it was now time for all the political parties to do what they could to address the situation.

As well as pressing for a single river authority, Fianna Fáil is also advocating legislation to introduce a new system of flood insurance based on the model currently operating in the UK.

“Many homes are struggling to get insurance after experiencing flooding. We are working to develop a new insurance model based on the UK example to provide a fund that will cover these homes,” Mr Murphy said.

He also pointed out that the Fianna Fáil election manifesto had committed the party to support the allocation of an extra €50 million to flood defence capital investment which wold be vital in addressing the structural problems in flood defences.

“Communities along the Shannon need real action to help deal with escalating flood problems. This suite of measures will help limit the impact of increasing flood waters,” said Mr Murphy.