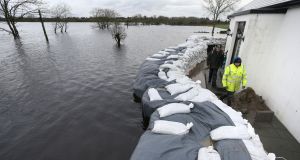 BEFORE: Ann Connolly’s house at Ballinastague, Co Galway, on Monday of this week with sandbags in place in a bid to stem floodwaters. Photograph: Joe O’Shaughnessy. 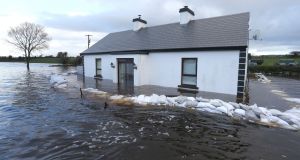 South Galway and parts of Mayo are once again bearing the brunt of this winter’s sixth storm, with river gauges set to continue rising over coming days.

Although rainfall was not as heavy as anticipated in the west, several properties succumbed to the elements overnight in spite of efforts to keep water at bay with pumps and sandbag defences.

Galway County Council director of services Liam Gavin said the situation in parts of south Galway was “as bad now” as during the floods of November 2009.

Gauges on the rivers Shannon, Suck, Clare and Dunkellin are critical, but Ballinasloe escaped the worst of the weather, and the N65 bridge across the Shannon at Portumna is still open.

However, up to 30 families in the south Galway area are still staying with relatives, with several being accommodated in hotels by Galway County Council, as floodwaters have cut off access routes to homes.

Sandbagging and pumps has kept water at bay around several houses in Labane village, which is taking traffic diverted off the main N18 Galway-Limerick route due to flooding on the road.

In the Shannon callows area around Clonfert, up to five houses are “under threat” of flooding, Mr Gavin said.

The N67 Kilcolgan to Kinvara route is being closely monitored, he said, with preparations under way in case the road should flood.

Some eight houses in Fohanagh, west of Ahascragh, are cut off and families are using a low loader to travel to and from their homes. Minor roads are affected around Peterswell, Skehanagh, Kilternan, Tierneevin and Ballynasteigue.

Craughwell village is still clear, but the Dunkellin river level is very high and sandbagging remains in place.

Renewed rainfall in Co Mayo early on Wednesday worsened an already serious flood situation in south Mayo leading to road closures, mostly in the Cong, Cross and The Neale areas.

The R334 road between Ballinrobe and Headford was closed at two locations - The Neale and Cross, and diversions were in place.

Other roads closed by floodwater included the routes between Clonbur and Kilmaine (N84), the L1611 between Roundfort and Tuam, the Westport to Partry road and the route between Erriff and Liscarney in west Mayo.

The Westport to Newport road was described by Mayo County Council as flooded but passable.

Cllr Damian Ryan said Storm Frank, which was followed on Wednesday by Storm Gertrude, had posed a serious flood situation for a number of households in the Lough Mask area which had previously been unaffected.

In Ballina, the River Moy burst its banks at Bachelor’s Walk, leading to flooding at Barrett Street, which was closed to traffic.

Local councillor Gerry Ginty said the council’s use of a high-powered pump had avoided a potentially serious flowing situation along riverside areas in the town.

About 100 homes in west Mayo, mostly in the Westport and Achill areas, which were left without power at the height of the storm, were expected to be reconnected by the ESB by Wednesday evening.

Fire brigade units and civil defence teams were on standby throughout Wednesday to lend assistance to council workers if required but their intervention was not required.

In Mayo, the area around the Neale is still underwater, and a number of minor roads are also affected - along with thousands of acres of farmland.