Exceptionally well built, it is a model of environmentally conscious design 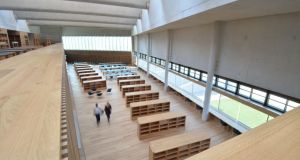 The exterior of DLR Lexicon, Dún Laoghaire’s new library, has aroused intense opposition, but the interior is bound to change the mood. 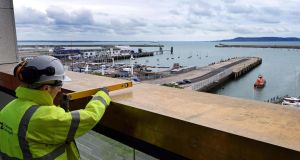 Engineer Fergal Connolly at the 5th floor window looking out over the harbour at the new County Library. Photograph: Eric Luke/The Irish Times 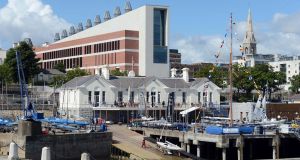 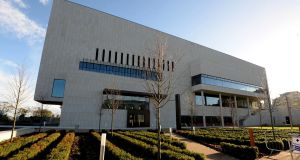 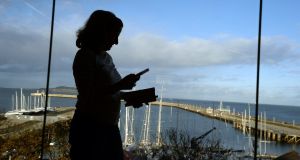 Not since the bunkers went up at Wood Quay has any contemporary building in Dublin been so detested as the new library in Dún Laoghaire. Indeed, long before the scaffolding even came down, it was denounced as a monstrosity and an extravagant waste of more than €30 million of taxpayers’ money.

There was something atavistic about this public anger, probably driven by an almost unconscious realisation that the building, officially called DLR Lexicon, had been misplaced. Unlike virtually everything else in Dún Laoghaire, which tends to be parallel to the seafront, the new library is perpendicular to it – in effect, breaking the rules.

It also consumed at least a quarter of Moran Park, seen as a convenient location as it was already in Dún Laoghaire-Rathdown County Council’s ownership, and there’s now a very hard boundary between its upper and lower levels that provides a platform for Andrew O’Connor’s tripartite Christ the King sculpture.

Contrary to popular imagination, the library site was not a green area, but rather an escarpment sloping down from Haigh Terrace. What used to be a bowling green has been reinvented as a lawn and an outdoor terrace on to which the library’s cafe will open, while a fetid pond at the upper level has been turned into an ornamental pool.

The new building is an oblong wedge, both in plan and elevation – something that’s more obvious from the sea than it is up close. It tapers to an enormous gable window facing towards Howth, a grand gesture that offers some of the most spectacular views of Dublin Bay, while side windows look out to either Dún Laoghaire or Sandycove.

Clad in Iberian granite on its monumental north elevation that addresses the park, and in English red brick with granite coursing on the Haigh Terrace side (in sympathy with many of the town’s Victorian buildings), it was consciously designed to link the busy seafront area known as The Metals with the main shopping street, which is in a bad way.

The design, by Cork-based architects Carr Cotter & Naessens, was chosen after an international architectural competition in 2006 that attracted an initial 139 entries. Three years later, in 2009, it went through the “Part 8” process for local authority projects and was approved by Dún Laoghaire-Rathdown councillors by 24 votes to three.

A model and drawings were on exhibition in the County Hall for anyone to see, but only 33 submissions were received from the public, mostly objecting to its scale and “inappropriate” location.

As usual in Ireland, the vast majority of Dún Laoghaire residents said nothing until they were confronted by the physical presence of the building. Then all hell broke loose.

I refrained from writing about it until I could get in to see the interiors, on the same basis that it’s always wrong to judge a book by its cover. And like most of those who got a preview on Culture Night or during Open House Dublin, I was bowled over by its spatial drama that culminates in a vast double-height space extending the full length.

The precast concrete “V” roof beams, with spans of six to 15 metres, are quite extraordinary. Each is clad on one side by slatted oak acoustic panels – a repeated motif throughout the building – and interspersed by parallel rooflights. And with windows looking out in every direction, any visitor will feel they can lord it over Dún Laoghaire.

The building is organised in two distinct parts. Along Haigh Terrace is a regular sequence of intimate rooms, workshops, meeting spaces and reading rooms, with windows that address the street. By contrast, the park side has voluminous spaces such as a lounge and main lending floor above, each with long windows and views to the park.

Exceptionally well-built by Sisk, DLR Lexicon is also a model of environmentally conscious design, with most of its spaces naturally ventilated. Stale air is drawn out and fresh air drawn in through “chimneys” capped by cowls on the roof that evoke the funnels on ships – quite unintentionally, according to architect David Naessens.

Years ago, when Stena Line was planning to bring its high-speed HSS ferry into Dún Laoghaire, it had to commission an environmental impact statement (EIS) on the new ferry terminal, which included the visual impact of such a large ship on the amenities of the harbour. The HSS is gone, but the new library (which also had an EIS) should last for 100 years.

It has two entrances, one at the lower level from The Metals and the main one at the opposite end, some 200m from George’s Street. Whichever way you enter, it’s clear that no expense was spared on in-situ cast concrete walls, oak panelling (solid and veneered), granite-paved floors, bespoke furniture and superb bookcases by Truwood.

Generous spaces for children and teenagers include well-equipped reading rooms as well as workplaces with stools arranged around large tables, or attached to a white-walled art gallery on one of the lower floors. But it will be the generally older users of a reference library on the top floor who will enjoy the most panoramic views.

Traditional public libraries were arranged around the central space of a reading room, but DLR Lexicon is vertically stacked so the layout is different. Its wedgy geometry is emphasised by the angular grand staircase (also in European oak, from Croatia and Germany) and the lighting rigs on the children’s floor, which are also set at an angle.

Staff are in the basement, including chief librarian Mairéad Owens, though this is less dreadful than it sounds as there are windows to let in daylight. She sees it as “Ireland’s library for the future”, with 80,000 items (books, CDs, DVDs etc) on display and automatic lending machines, which look like ATMs, for checking them in and out.

As for negative public reaction to the project, Owens believes “we turned a corner” on Culture Night, when there was a “really nice atmosphere, with kids tumbling on the grass”. About 200 members of community groups will visit today. “We love it, and we’re hoping the public will love it as much when they come in,” she said.

DLR Lexicon is due to open generally on December 8th. Be prepared to be as surprised and delighted as nearly everyone who has seen this bold addition to the landscape of Dún Laoghaire, the first major public building in the town since its County Hall was completed in 1999.

In time, the controversy over how it came about will be forgotten.