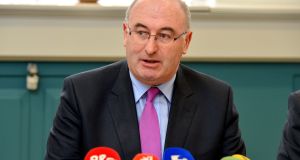 Carlow County Council received an additional €1 million last year after its members vowed to take up their budget grievances with local TD and then minister for local government Phil Hogan.

The council was one of four that, between 2013 and 2014, complained to Mr Hogan’s department about their general purpose grant, which is distributed from central government to finance councils’ day-to-day activities.

A letter was seen by The Irish Times that was sent to Mr Hogan’s department by Carlow’s head of finance, Pat Delaney, on December 16th, 2013. It revealed Mr Delaney’s disappointment with the level of planned funding in 2014.

He said the council would face a shortfall of €689,372 compared with 2013 if the original allocation stood.

“Elected members will be looking for an urgent meeting with the Minister (Carlow is in the Minister’s Constituency),” the letter stated.

Two days later, departmental documents revealed that an extra €1 million would be set aside for the county’s 2014 general purpose grant.

He confirmed that the matter was satisfactorily resolved after it was brought to the attention of Irish Water and the department.

Expenditure on the establishment of water services infrastructure is touched on in three of the four complaints received by the department, with officials from Kerry and Sligo also citing their belief that the set-up of Irish Water should have been cost neutral.

The correspondence, released under FoI legislation, also show contact between Fine Gael’s then mayor of Kerry, Séamus Cosaí Fitzgerald, and department officials on December 13th, 2013. He lamented a €12 million reduction in council funding for 2014, which he said would cause an “extraordinary crisis”.

Similarly, strongly worded representations made to the department by Sligo County Council, also on December 13th, 2013, outlined a “serious error” which would result in a €2.5 million shortfall for 2014, according to acting county manager Dorothy Clarke.

In the letter, Ms Clarke says guarantees received from the department that Sligo was being “looked after” were “wholly incorrect”, and that the council suffered a shortfall of €1.9 million due to the net cost of running services associated with Irish Water.

However, a supplemental grant of €1 million was set aside by the department to deal with Sligo’s difficulties. Three-qarters of that continues to be withheld until the council provides a realistic cost-cutting plan.