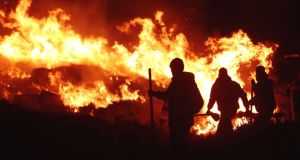 Local people work at preventing the gorse fire from spreading in the Barna area outside Galway city. Photograph: Joe O'Shaughnessy

“Tinder-box” woodland and vegetation along the west coast is in a “highly flammable” state due to unseasonally dry weather, a senior fire officer has warned.

Emergency fire crews have been working constantly in parts of Connemara over the past five days, fighting extensive gorse fires that threatened housing on several occasions early today – with flames on the mainland visible from the Aran islands.

Galway chief fire officer Michael Raftery said city crews had to call in assistance from fire units based in Tuam, Athenry and Loughrea, due to the extent and intensity of the blazes.

Two fires in Furbo and Spiddal were tackled today. People living outside Barna village had assisted in digging trenches late last night, when it seemed that houses might be affected.

Much of the west coast has missed out on the substantial rainfall which is normal for this time of year. Easterly winds have reduced the moisture content in trees and vegetation. Firefighters say it is hard to know what has caused the blazes, but the unseasonal sunshine has certainly not been matched by picnic temperatures.

“We can get a week or two of this every year, when forestry is most at risk, but I don’t remember this happening as early as this for some time,” Mr Raftery said.

He has appealed to landowners and farmers to be vigilant. There are restrictions on burning vegetation from March to the end of August due to the fire risk.

Galway City Council says the dry stretch is placing no strain on drinking-water supplies for the moment.

However, the Aran island of Inis Oírr, which regularly experiences a drought in high summer, is being monitored.

Paddy Crowe of Comhar Caomhán Teo, the island co-op, said it welcomed Galway County Council’s promise of a reverse osmosis plant which would alleviate the problem.

Birdwatch Ireland chief operating officer Oran O’Sullivan said that migrating birds were a week to two weeks behind schedule due to air and ground temperatures which resulted in the coldest March on record.

The first fall of migrants arrived on west Cork’s Cape Clear island at the weekend, he said, but many migrants were biding their time in France and further south until the easterly winds abated.

“There’s been a big passage of continental song thrushes, but no big movement of the more common migrants, and no sign of chiffchaffs or blackcaps,” he noted.

“We are witnessing winter behaviour still, with very little birdsong, and people are still feeding garden birds as the overnight temperatures are so low.”