Fire extinguished at storage facility in Ballymount in Dublin 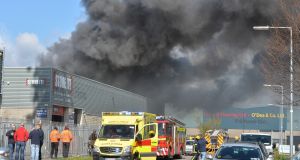 A spokesman for Dublin Fire Brigade said the level of response required to deal with the blaze in the Ballymount Cross industrial estate had been “very much on the higher end of the scale”. Photograph: Alan Betson/The Irish Times 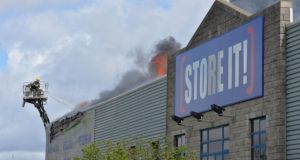 A fire which broke out at the Store It facility in the Ballymount Cross industrial estate has been extinguished, according to Dublin Fire Brigade.

The fire was reported at 10.15am on Wednesday at the building near the M50 in Dublin.

A fire brigade spokesman said two fire crews remained at the scene this morning to continue “dampening down” the remains of the blaze and were expected to finish up within a few hours.

He said the building had suffered serious damage but that Dublin Fire Brigade had successfully prevented the fire from spreading to an adjacent part of the building.

The scene will now be handed over to the Garda to carry out a forensic examination to determine the cause of the blaze.

A spokesman for Dublin Fire Brigade said on Wednesday the level of responses required to deal with the blaze had been “very much on the higher end of the scale” with seven fire appliances, two aerial appliances, specialist units and senior officers at the scene.

A number of people were moved from adjacent buildings but no casualties were reported.

The facility offers storage to householders and businesses.