US agency says rate of temperature increases are ‘astronomical’, ‘staggering’ and ‘strange’ 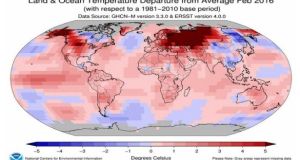 Earth got so hot last month that scientists described the temperatures as “astronomical”, “staggering” and “strange”, according to a new report.

And the US experts warned that Earth’s climate may have moved into a new, hotter neighbourhood.

This was not just another of the drumbeat of 10 straight broken monthly global heat records, triggered by a super El Nino and man-made global warming.

February 2016 obliterated old marks by such a margin that it was the most above-normal month since meteorologists started keeping track in 1880.

The National Oceanic and Atmospheric Administration said Earth averaged 56.08 degrees in February, 2.18 degrees above average - beating the old record for February set in 2015 by nearly six-tenths of a degree.

NOAA climate scientist Jessica Blunden said records were smashed on the land, the oceans, and the lower and middle atmosphere.