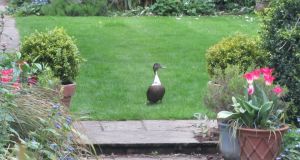 Visitor: the duck Emer Buckley saw in her garden; it looks like one of the Belgian ducks, a Termonde or Huttegem

On my evening walk I see one of the crow family perched on the highest trees. It calls with a sonorous honk (or a throaty caw). It’s bigger than a grey crow and all black. I hope we have our first raven.
Mary Lavin
Frenchpark, Co Roscommon

Occasionally we have a gang of four seagulls. Like the mods and rockers of old, they get their kicks by harrying the buzzards and buzzing the heron.
Robin Harte
Strawberry Beds, Dublin

Could you identify the egg in my photograph, which I found under the hedge?
Dermot Mahon

It is a blackbird’s egg.

Could you identify a duck that flew into our garden recently? There are similar ducks in Ranelagh Park.
Emer Buckley
Ranelagh, Dublin

From your photograph, it looks like one of the Belgian ducks, a Termonde or Huttegem.

Down by the lake shore I was astonished to see a hen chaffinch twice rise up to devour an incoming mayfly, of which she made quite a substantial snack.
Tom Wilmot
Ballyshannon, Co Donegal

Hearing a commotion in my back garden, I found a magpie attacking a fully fledged starling, which flew away while its parents dive-bombed the attacker. The attack continued across rooftops until the parents were bolstered by more adult starlings and the magpie gave up. The youngster was saved.
Shane Quinn
Maynooth, Co Kildare

Lots of dead starfish were washed up on the beach at Greystones. Is this a natural phenomenon or is something unusual killing these creatures?
Susanna Murdoch
Greystones, Co Wicklow

These strandings of starfish occur occasionally. Various reasons have been suggested, such as toxic algal bloom or pollution, but some experts to think that they are washed in on the beach because of stormy weather and expire there.

A clarification: the list of birds exempted from protection in the Wildlife Act has been scrapped, and now all wild birds are protected.