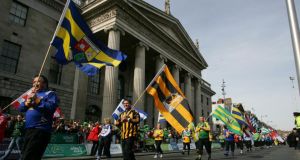 The Western Way to Frederick Street North closed at 8pm on Monday night and will reopen at 2.30pm on Tuesday.

The St Patrick’s Festival Funfair is being held at two venues and will see Custom House Quay closed until 6am and Merrion Square South until 6pm on March 18th.

Severe traffic delays can be expected in Ballsbridge as the Irish Beer and Whiskey Fest takes place at the RDS from 12.30pm to 12.30am.

Traffic is expected to be at its worst in the afternoon on the holiday, with the Leinster Schools Rugby Cup final between Belvedere College and Cistercian College Roscrea also taking place in the RDS at 4pm.

Sport is also set to result in traffic problems on the northside, with the All-Ireland hurling and football Senior Club Championships taking place in Croke Park.

Dart and commuter trains will operate a Sunday service, but with extra trains before and after the parade.

Tara Street Station will be closed until 4pm. Intercity services will operate to a revised schedule.

Dublin Bus will be operating a number of diversions - a full list is available at dublinbus.ie.

Bus Éireann will operate a Sunday service with some alterations available at buseireann.ie.