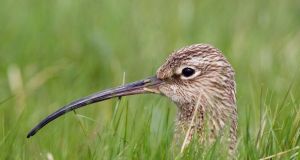 A curlew sits on its nest in the tall grass of the Shannon Callows. Photograph: Mike Brown

BirdWatch Ireland has launched a campaign to save one of the country’s most endangered and renowned species.

The group reckons that about 80 per cent of the Curlew breeding population has been lost since the 1970s and only a few hundred pairs remain.

The haunting cry of the bird is one of the most evocative sounds of the marshes and uplands in summer. And the group say action is needed to ensure it does not become a mere memory.

BirdWatch Ireland has planned a programme of change to ensure that Curlews are afforded every chance to survive and thrive once again.

The scheme will cost almost €100,000 and the group has appealed directly to the public for support.

The cash will be spent on conducting a national breeding survey of Curlews and other waders to discover how many breeding pairs remain and their location.

It will also fund research into factors influencing their survival and distribution. BirdWatch Ireland also hopes to devise ways of restoring the Curlew’s habitats, such as rewetting upland areas, clearance of gorse and scrub, and improving grazing management to benefit breeding.