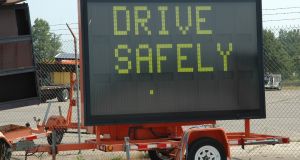 Election candidates using electronic signs similar to those used for traffic alerts face enforcement action to have them removed.

Election candidates who promote themselves using electronic signs similar to those used for traffic alerts have been warned they face enforcement action to have them removed.

The Department of Environment said it had been made aware that such electronic display panels were being placed in visible locations on, or adjacent to, public roads.

The signs were being used for “general advertisement purposes and not for traffic management or emergency-related purposes”.

It said it had recently issued a circular to remind local authorities of their obligations with regard to unauthorised use of electronic display panels and other signs or notices on or adjacent to public roads for advertising purposes.

“Such structures generally comprise of an electronic display panel or screen – also known as Variable Message Signs (VMS) or VMS display panels – anchored by a power unit or battery for the purposes of displaying information or messages to the public, often in a flashing manner, which can consequently be a distraction and traffic hazard for road users.”

The advice equally applied to any other signs, notices or structures “whether on wheels or not” where they were on or adjacent to public roads and had not been granted planning permission.

Local authorities had powers available under the Roads Act 1993 to “promptly pursue the removal of such structures”.