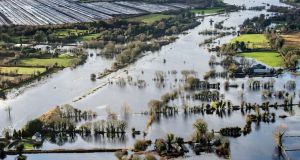 Water levels on the River Shannon in Athlone rose by 10mm on Saturday night as efforts continued to prevent properties in the area from flooding.

Westmeath County Council director of services Barry Kehoe said the council is still working off an ESB forecast for a further 40mm rise by Wednesday.

However, he was pleased with how the defences are holding and said “we are happy once we are keeping it [floodwater] out.”

Three houses in the Athlone area have flooded this week. Independent Alliance Cllr Kevin “Boxer” Moran believes the defences can withstand the flood if there aren’t any major structural breaches or serious issues with pumps. He said “it is getting harder now because people are tired” but his main concern was that a wall could break or a dam might burst.

The primary areas of concern were along the Strand and Wolfe Tone Terrace on the east bank of the river, he explained. On the western side, he admitted “the wall between Parnell Square and The Park is a concern”.

However, he was hoping to get an engineer in to inspect it. “I’d say if we hold today we will have the back broke in it,” he remarked.

He took comfort from the fact the water levels in the River Suck upstream had dropped.

Mr Kehoe said: “We are watching the walls and barriers and we don’t see any dangers at the moment.”

He admitted pump failures could pose a threat to flood prevention measures.

Westmeath County Council said while current flooding in Athlone was having a severe effect on a small portion of the town, the effects were localised and there is no impact on the town at large.

Irish Water has said there is no issue with the water supply in the town.

The River Shannon continued to rise overnight in Co Offaly, where the civil defence were on standby should they be needed.

At Shannonbridge the river again rose by 40mm and in Banagher it was up 15mm in 24 hours.

Two houses remained flooded in Shannon Harbour and sandbags were deployed at properties in the village as a precautionary measure. Suction tankers were brought in to clear some of the floodwater at the Portavolla estate in Banagher on Saturday. Additional sandbags were put in place throughout the estate.

An extra pump was deployed at Main Street in Shannonbridge where sandbags were made available for properties.

Offaly County Council said the civil defence remained available and were on standby to assist as required. The situation is being continuously monitored. ENDS

Four vehicles, drugs and cash seized in Dublin and Meath 13:51
Covid-19: Three outbreaks in past two weeks linked to overseas flights 13:22
Three whales wash up on Donegal beach 12:18
Two arrested after €130,000 cocaine and cannabis seizure in Co Mayo 12:12
Government to add US and four EU countries to quarantine list 08:31