€4 billion cost of 17km line cannot be funded, nor can the €2 billion Dart Underground 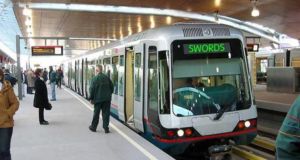 Computer-generated image of what Metro North arriving at Swords Station could have looked like.

Economic reality has finally dawned on the National Transport Authority.

In March 2011, its “2030 vision” was still championing such boom-time projects as Metro North and Dart Underground. But the “implementation programme” is much more modest in scale.*

The latest programme, now out for public consultation, merely aims to “protect or progress Dart Underground in line with the Government’s decision on the next capital plan” – from 2018 onwards – and extend Dart-style electrification to the Maynooth line.


Tunnel link
As an interim measure, it proposes reopening the largely disused Phoenix Park tunnel linking Heuston and Connolly stations, so that commuters on the Kildare line can travel directly to Docklands. But this is not seen as a substitute for Dart Underground.

The long-mooted upgrade of antiquated signalling along the critical city-centre stretch of railway between Connolly Station and Grand Canal Dock will finally proceed, to accommodate an additional eight trains per hour in each direction, up from 12 per hour to 20.

This is described as “a key project aimed at unlocking the existing bottleneck in the city centre, which will have positive spin-off effects for Dart, commuter and inter-city passengers”.

What is remarkable, however, is that there has been such a long delay in delivering it. Now we’re told that the completion of resignalling the line would allow commuter services to start using the Phoenix Park tunnel “in late 2015 or early 2016”.


Unspecified cost
How much this project will cost is not specified, as no figures are given for any scheme included in the programme.

It envisages that the Luas cross-city link – now finally under construction after being shelved by the Fianna Fáil-Progressive Democrats government in 1997 – will open “before the end of 2017”.

It also includes more rapid cross-city buses, a new city centre coach station, extension of Dart services to Balbriggan by electrifying the northern commuter line and a gradual renewal of the the Dublin Bus fleet so that no bus would be more than seven years old.