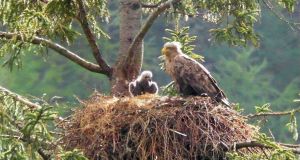 Eagle chicks have hatched beside one of the Killarney lakes.

Anglers who have been guarding a white-tailed eagle nest on an island on Lough Lein, the largest of the Killarney lakes, have reported the hatching of chicks in the past few days in the nest high in a tree.

The Trout Anglers Federation of Ireland (TAFI), the national governing body for recreational and competitive trout anglers, have asked people to keep their distance from the area. “We are appealing to all anglers and lake users for your continued support in making sure this very important time is stress free for the eagles,” TAFI said.

It is believed two chicks hatched.

Wildlife ranger Peter O’Toole said the National Parks and Wildlife Service was greatly appreciative of the anglers who were “watching over the eagles”.

While two chicks might hatch, it is often the case that only one eagle survives, he said. Other nesting pairs are in Glengarriff in west Cork.

The white-tailed eagle was introduced from Norway in 2007, bringing eagles back to Kerry after 100 years. It is part of a joint project between the National Parks and Wildlife Service and the Golden Eagle Trust .

1 Covid-19: Cases increasingly occurring among young people, officials say
2 Mother and five children sleeping in car while seeking accommodation
3 Depp may have severed own finger, according to email to doctor, court told
4 Dáil committee to investigate Bríd Smith comments about judge
5 Donald Trump is an amateur populist – the real trouble is yet to come
Real news has value SUBSCRIBE