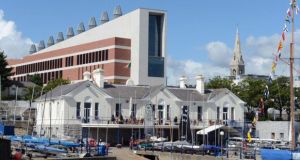 The building which has courted controversy and strong reactions in the Dublin seaside town of Dun Laoghaire has quietly opened its doors to the public.

It also houses the first municipal gallery in Dun Laoghaire Rathdown as well as a cafe. For night owl readers it has a 24 hour book return service with a self-service book sorter.

The main library area has seating areas next to the floor-to-ceiling windows that look out on Dublin Bay. The centre houses about 80,000 items, including books, CDs and DVDs, for people to borrow.

The outside area at Moran Park has been landscaped to include a new water feature and gardens which can host events.

“The LexIcon embraces the modern concept of what a library should be , a key community space where all are welcome,” county librarian Maireád Owens said in a statement.

“When people walk through the door I hope they get a sense of ‘wow’, it’s a stunning public space and quite extraordinary,” she said.

The building would be key for the county’s cultural programme and a “vibrant centre of learning” for locals.

The building was the result of a RIAI (Royal Institute of Architects of Ireland) international competition held in 2007. The architect is David Naessens and is was built by Sisk.