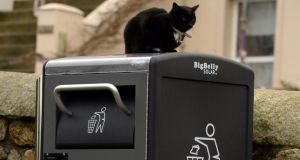 Big Belly bin in Dalkey: they are fitted with solar-powered waste compactors which crush rubbish. Their large pull-down opening has been used by some residents to dump household rubbish. Photograph: Cyril Byrne/The Irish Times

More than 400 high-tech public litter bins, being installed throughout southeast Dublin at a cost of almost €2.3 million, have to be re-engineered due to illegal dumping of household waste.

The American-manufactured “Big Belly” bins are fitted with solar-powered waste compactors which crush rubbish to increase the capacity of the bin by six to eight times that of a traditional litter bin. Sensors in the bin detect when it’s full and send a message to council staff letting them know the bin needs to be emptied.

However, unlike traditional bins that have a narrow slot or hole for depositing litter, the smart bins have a large pull-down opening which, since their installation last month, has been used by some Dún Laoghaire-Rathdown residents to illegally dump their household rubbish.

Almost 250 of the bins have so far been installed, with the remainder to be in place by the middle of next month. To counteract the illegal dumping problem special brackets are being retro-fitted to the bins to make the opening smaller. To date 100 bins have had the bracket fitted, the spokesman said.

“The bracket is being installed to restrict opportunities for dumping domestic waste in the bins. I don’t think it would be correct to say there has been widespread problems with this but there certainly has been instances of it.”

All the new bins will be fitted with the “revised opening” within weeks, he said, and the work is being carried out by the supplier as part of the installation contract at no additional cost to the council.

“This cost will be offset by savings in the service over the coming years as the new bins will ensure a reduction in operating costs through a 75 per cent reduction in the number of litter bins emptied per day,” the spokesman said.

Cars to give way for Sandymount cycle path 02:02
Meat plant clusters may be down to softly-softly approach 02:00
Midlands lockdown could extend to other areas, warns Covid-19 team 02:00
HSE eyeing private hospitals in the event of new Covid wave 01:14
‘Deep and urgent threat’: Martin defends midlands lockdown 01:00