Freezing temperatures may bring snow on Sunday night and Monday 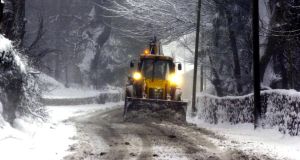 A bulldozer clears a route through the snow for motorists in the Dublin mountains near the Hell Fire Club towards the Sally Gap. File image: Bryan O’Brien/The Irish Times

Westerners may have to trade the sunglasses for galoshes over the coming days with snow and rain set to replace the high temperatures of the last week.

Having had the best of the somewhat deceptive seasonal sunshine, a sustained spell of wet and cold weather will hit the entire country over the weekend heading into early next week.

According to Met Éireann’s Willemien Phelan, freezing temperatures on Sunday night and Monday may even prompt wintery showers in certain areas.

“Today we’re seeing the cloud increasing. The rain has already reached Munster and that’s pushing northwards. That will be widespread this afternoon as it pushes from south to north, before stalling over Connacht and Ulster tonight,” she said.

“Then a cold front will push southwards tonight, and a cold, northerly wind will follow from the rain and showers overnight on Saturday. That cold wind will then persist for a couple of days. It really is going to spoil quite a lot of people’s plans for the weekend.

“It will be the coldest on Monday, and that is cold enough for snow on Sunday night. Temperatures will go down below freezing on Sunday night, and if there is any precipitation it will be wintery on higher ground.

“On Monday there will be widespread showers, some of which could be heavy. Those showers could turn wintery along the western half of the country, so that is hail on higher ground with possibly sleet or snow. It will feel cold as well with those westerly winds,” she added.

The sudden change will come as a shock to people in western areas, who were able to bask in temperatures of up to 21 degrees. This was recorded at the Newport meteorological station in Mayo yesterday.

“It was an interesting picture over the last couple of days where it was always milder in the west, the west really had the best sunshine because the easterly wind was cold and it was keeping the east quite cool. But from the next couple of days it will be wet in the west which is going to be a big change for people to experience,” said the forecaster.

Next week present an unsettled picture beyond Monday, with below average temperatures expected to persist.