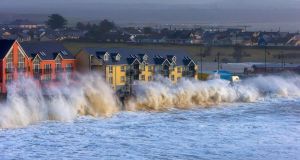 High seas batter Tramore seafront in January. Prof John Sweeney of the Irish climate analysis and research unit at NUI Maynooth said the confluence of high winds, rising sea levels, low pressure and heavy rain, which has given rise to the flooding this week, is set to become more frequent.

As coastal and riverside communities mop up after their wettest January in two decades, Met Éireann has predicted that tomorrow will be another day of severe coastal storms – with at least two more such days before the end of the week.

In addition, adverse conditions which brought flooding to homes and businesses in counties Limerick, Galway Kerry, Cork and Wexford, are set to become significantly more frequent in coming years, with a need for multimillion- euro spending on riverside dykes and coastal defences.

That is the view of weather forecasters, climatologists and planners who yesterday called for better flood-prevention measures, better planning and more enlightened climate change strategies.

Prof John Sweeney of the Irish climate analysis and research unit at NUI Maynooth said the confluence of high winds, rising sea levels, low pressure and heavy rain, which has given rise to the flooding this week, is set to become more frequent.

Prof Sweeney said there had been two moons in January with exceptionally high tides, while the low pressure would also have encouraged high seas and the extra rainfall made rivers overflow, particularly where there was a strong coastal wind along an estuary.

“With climate change ratcheting up in the background, events which have been described as one in a 100- year storms, will become more like one in 20-year storms.”

Referring particularly to floods in Limerick, where the Shannon broke its banks, Prof Sweeney said many of the earthen banks were suitable for the last century. A climate change towards warmer, wetter weather had already begun to deliver heavier, more intense rainfall and it may be appropriate to engineer higher banks in order to protect the city. He called on the Government to redouble its efforts to reduce greenhouse gas emissions which he said were rising again with the pick-up in the economy.

Shannon dyke
Former Green Party minister and DIT lecturer in town planning Ciarán Cuffe agreed that a new dyke may be necessary along the Shannon.

He said the appropriate response to the recent flooding was a mixture of engineering riverside and coastal defences and tighter planning controls. The insurance industry appeared to have the best flood plain maps and these should be shared with the Office of Public Works. Mr Cuffe said while some coastal areas could not be defended there were inflatable barriers and barriers that could rise from the ground in minutes and were suitable for protecting areas such as Clontarf in north Dublin.

He warned that county development plans would in future have to take much closer account of OPW and Department of Environment flood- plain mapping if scenes of devastation to communities such as that in St Mary’s Park in Limerick were to be avoided.

Chief forecaster with Met Éireann Gerald Fleming said a series of low pressure fronts was coming “relentlessly” across the Atlantic and combining with spring tides and high winds. He said the pattern was set to continue for at least the rest of this week.

Met Éireann said rainfall levels were above average everywhere for the month.

Ireland West International Airport in Co Mayo had its wettest January on record with 208.1mm of rain.

Belmullet reported its wettest January for 21 years with 210.5mm of rain.

Valentia Observatory was the wettest station, recording 289mm of rain, its wettest January in five years.

Met Éireann said frost, fog and ice would clear early this morning and it would be dry for a spell with sunshine in many areas. However, strong to gale- force southeasterly winds and spells of heavy rain would develop across the southern half of the country during the evening, spreading countrywide early tomorrow, it said. It will be cold, with highest temperatures of six to 10 degrees.

The forecast for tomorrow is for more showers merging to form longer spells of rain by the middle of the day with the risk of thundery downpours.

Already swollen rivers may not be able to contain the flow and flooding may occur, Met Éireann warned.

Frequent showers
Thursday will be much brighter with showers frequent over the western half of the country, but they will be well scattered on the eastern side. Highest temperatures will be about six or seven degrees. Thursday night will be clear but it will be cold and frosty as air temperatures fall to freezing.

Friday is expected to start bright and frosty. The morning will be generally sunny and dry but in the afternoon cloud will increase and rain will reach the southwest by the end of the afternoon. During the evening and night, the heavy rain will extend to all parts. Rain is predicted to continue for most areas until at least Sunday.