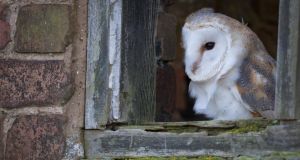 The barn owl is now on the red or critical list of endangered species. Photograph: Thinkstock

The deaths of endangered barn owls along the Tralee bypass has led to the first ever survey in Ireland of the impact of a major road project on the bird.

The barn owl is now on the red or critical list of endangered species.

The 13.5km, €97 million bypass along the N22/N69 of single and dual carriageway opened in August 2013, but within in days barn owls began to be killed.

In the environmental impact study for the project, owls were identified in Ballyseedy Wood and in an old house which has since been demolished. Both were seen as at distance from the road and it was felt there would be no major impact.

So far, seven owls including one long-eared owl have been recorded as killed in traffic collisions. However bird watchers suspect many more deaths have gone undetected.

Two birds, barn owl chicks, were found dead on a single day last week. They were found four kilometres apart so the deaths are not confined to one area.

Owls more than any other species are turning up dead on the road.

Kerry is one of the few strongholds left of the barn owl. The loss of so many birds in such a short period is “depressing” and may well be adversely affecting the future of owls in this country, according to Michael O’Clery, who is conducting the survey for BirdWatch Ireland.

With just 60 to 70 pairs of barn owls left in the country, the NRA, too, is worried about so many casualties and is funding a survey of the area.

Mr O’Clery, of Birding Kerry says: “Barn owls and motorways do not mix”.

Since August 2014, Mr O’Clery has surveyed 200sq km along the bypass and has found seven sites of barn owl activity – including roosts and nesting sites.

He believes he has already begun to identify how barn owls can be protected from roads.

The older N23 Tralee to Castleisland has high hedging and wooden screening mitigating noise for housing.

This may is also prove a protective measure for owls. No owls are turning up dead along this road.

The survey may be followed at: iti.ms/1BC3IF0.