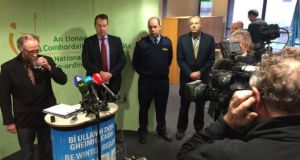 Members of the National Emergency Coordination Group prepare to brief the media.

Councils around the State are gauging the damage caused by flooding over the past weeks as weather patterns start to return to normal.

More rain is expected on Wednesday but Met Éireann meteorologist Gerald Fleming said it will be a normal winter weather system which should bring about 10mm to 15mm of rainfall and clear away by Thursday. “From a weather point of view, things look like they are returning to normal,” he said.

Jim Casey from the Office of Public Works said the upper Shannon catchment area continues to rise but has slowed down significantly. However, water levels have risen by 2cm at Athlone and 3cm at Lough Ree.

Elsewhere, river levels have fallen at Limerick as well as on the Brosna, the Inny, the Moy, the Munster Blackwater and the Slaney, among others.

However, Mr Casey said there remains a “severe flood situation” in the mid to lower Shannon catchment areas and added that rain forecast this week poses a risk for counties Monaghan, Cavan, Meath and Louth.

The ESB said the levels in Lough Derg increased marginally in the 24 hours to Tuesday morning and that the flow through Parteen Weir would remain at 470 cumecs.

It reiterated that the levels in the lake may reach 2009 levels in the coming days which could lead to an increase in the flow through the weir to 500 cumecs.

The briefing also heard the ESB was now hopeful the outflow at the weir would remain at 470 cumecs.

Brendan McGrath of the City and County Managers’ Association said the local authority response is still ongoing with stability most noticeable in southern counties. He added that families who were evacuated from Bastian Quay apartments in Athlone have now returned home.

Westmeath County Council said the River Shannon remains at a high level through Athlone and its hinterland but is expected to stabilise and begin to recede over the coming days. It added that 32 families were still in emergency accomodation as of Tuesday morning.

With many schools re-opening on Wednesday, An Garda Síochána advised drivers to follow road signs and take diversionary routes. Supt Gerry Murphy of the Garda Press Office also said parents should ensure children who travel to school on foot or by bicycle have a safe route there and back.

He said two reconnaissance heli-flights were taking place on Tuesday to ascertain the extent of the flooding.